We would like to present you the second entry in our cycle “Patents without Secrets” that is dedicated to regulations related to patent procedure in the American jurisdiction. Many of our Clients express their interest in seeking patent protection in the USA, therefore we would like to provide you with all the essential information regarding proceedings before the UPSTO. In the following article we invite you to explore yet another institution that is unique to American legal system: continuation-in-part of patent applications (CIP). 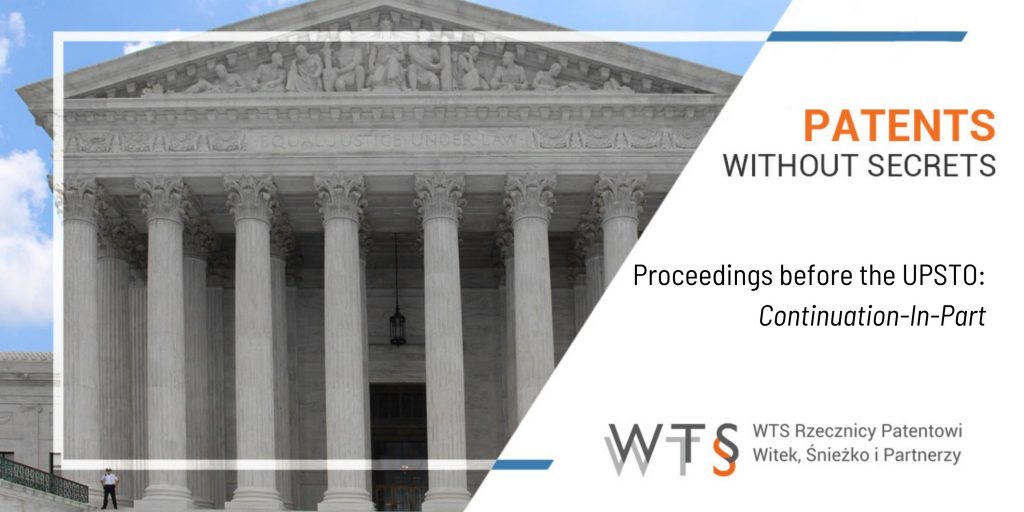 The rules pertaining to a continuation-in-part can be found in the Title 35 of the United States Code (Patents) as well as in the Title 37 of Code of Federal Regulations (Patents, Trademarks, and Copyrights). It is Section 1.53(b) of 37 CFR that specifically mentions the CIP application, stating very clearly that it provides the sole basis for filing applications of this kind. What additionally serves as a particularly valuable point of reference is the Manual of Patent Examining Procedure (MPEP) edited and published by the UPSTO.

What the CIP application should include?

The CIP application shall consist of either substantial portion or an entirety of a matter disclosed in an earlier nonprovisional application; furthermore, it can complement it with a matter that has not been disclosed previously.

Therefore the CIP application should be perceived as an add-on of sorts to an existing, previous patent application: in the process of conducting further research after filing of on original application, it can turn out that we implement certain improvements to features of our inventions, or we find a new application for it and we would like to incorporate such a matter into our application. The CIP application can contain descriptions of new embodiments of a particular invention or invoke experimental results that have not been available before.

Who can file the CIP application?

Claiming the benefit of a previous application

The CIP application, in order to be effective, must claim the benefit of an earlier filing date of an original application — this can be achieved under two specific provisions of 35 U.S.C.:

Claiming benefit of an earlier filing date is dependent on fulfilling certain conditions. It must be emphasized that the CIP application must contain or be amended to contain a specific reference to the earlier filed application. It shall be submitted in the first sentence of the specification or be included in an application data sheet if data sheet is used.

At this point let us recall briefly some key information related to a provisional patent application in the USA — an issue that we covered in our previous article:

Bearing these rules in mind, it is necessary to state unequivocally that it is not possible to file a CIP application that would claim a benefit of filing date of a provisional application.

Is it worth to file a CIP application?

Unsurprisingly, a universal answer to this question does not exist; advantages and drawbacks of a CIP application should be evaluated with regard to specific circumstances occurring in a given situation. There are however some general pros and cons of this institution that we would like you to be aware of.

When it comes to assets of the CIP application one should take note of flexibility that it guarantees — it permits to expand on the matter previously disclosed without filing a completely new application, what in consequence leads to saving costs that starting a separate patent procedure would certainly entail. A possibility of claiming benefit of an earlier date of a previous application can play a quite significant role when it is necessary to determine the state of art relevant for assessment of patentability of given improvements or developments to our solutions. Moreover, if patent claims included in the CIP application were put into a subsequent separate application, they would have to independently meet patentability criteria and they would have to disclose a matter that would not be obvious in the light of an original application.

Nevertheless, a CIP application has some aspects that are not that convenient for the applicant: the most important drawback would be shortening of duration of a patent protection; 20-year period would start its running on the filing date of the first application.

Let us reflect on yet another problem: as it is expressly stated in Section 201.11(I)(B) MPEP, claiming a benefit of a filing date of an original application is allowed only with regard to those claims included in a CIP application that are directed solely to subject matter disclosed in compliance with requirements provided by 35 U.S.C. 112 in the previous application. If a conclusion is reached that certain claims go beyond the limits designated by the subject matter of the previous application; those claims would be untitled only to the filing date of the continuation-in-part application. Therefore we would have to deal with a heterogenous legal regime wherein distinct patent claims would have different priority dates.