The most recent posts in our cycle “Patents Without Secrets” concerned the limitations to patent rights; this time we would like to present you the other side of the coin: namely, situations wherein the legislator allows for the extension of the scope of protection. In other terms, we would like discuss in which cases we will be dealing with the indirect patent protection. The indirectness of protection, as it is explained in the commentary to  the Act of June 30, 2000 on Industrial Property Law (hereinafter: IPL) edited by Doctor Michalak, comes down to “an extension of the scope of patent protection by the power of law, independently from the content of patent claims”.

The grounds for such an extension of the protection can be found in Articles 64 and 65 of the IPL. According to Article 64 Section 1 of the IPL, a patent for an invention concerning a process of production encompasses also products obtained directly through that process. Article 65 refers to a specific case of the indirect protection, as it is related to new uses of substances. Below you can find our brief analysis of those relevant provisions. 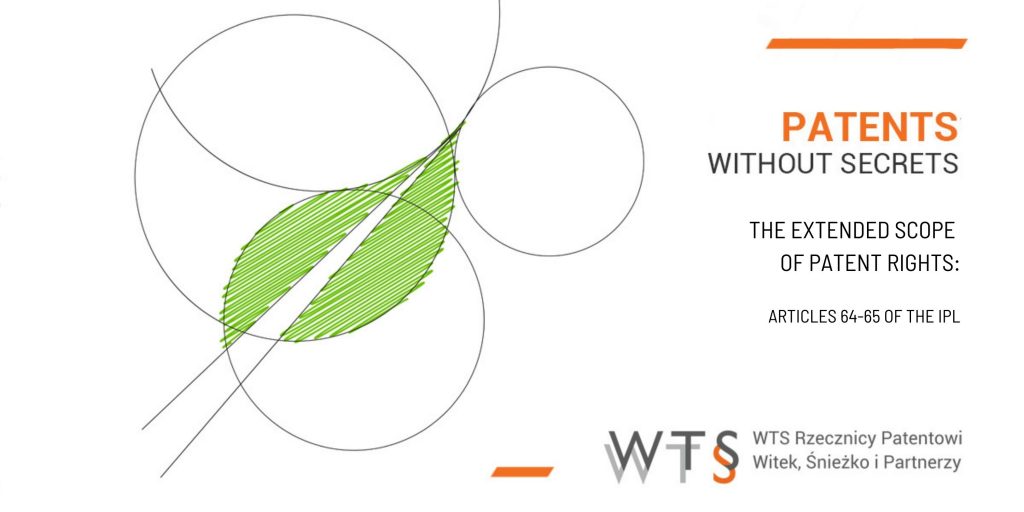 The regulation of Article 64, seemingly en passant, introduces into the Polish legal system two kinds of patents: the first category being patents granted for products; and the second, patents for processes; processes, it shall be added, that have a certain productive dimension: through their application a new product is obtained.

This distinction, what should be strongly emphasized, has some important consequences in practice: a patent granted for an invention which is a process would be characterized by a different scope of exclusive rights of a patent holder. As it is demonstrated in the commentary to the IPL edited by Professor Sieńczyło-Chlabicz, what would fall within the properly delineated scope of protection, is: “the use of an invention in a commercial or professional manner, consisting of applying a process being a subject matter of an invention, as well as using, offering, placing on the market, or importing for those purposes products obtained directly through that process.” The Appellate Court in Warsaw in its judgment of November 15, 2004 explained that whenever we are dealing with an invention related to a process of production, “its application involves the technical use of that process, the result of which can be a new product, or the new state of the art which does not lead to changes in a product affected by that new process” (I ACa 37/04).

Not only is an invention-process protected but also the protection is enjoyed by the product obtained directly through the application of that process. The key world whose meaning requires from us to carry out a more thorough analysis, is the term “directly”. The doctrine offers us two propositions for how can we interpret it. Professor du Vall in “Patent Law” wrote that we can adopt either a chronological or a qualitative notion of directness (he prefers the latter). The chronological directness would be based on an assumption that there are no intermediary steps between the moment when the protected process is applied and the moment when a final product comes to existence — which, as du Vall argues, would lead to restricting the protection, taking into account that “usually, at the last stage of production, most commonly non-innovational methods, unprotected by patents, involving a final treatment of a previously formed product are employed”. On the other hand, if we are guided by the qualitative notion of directness, we are expected to determine whether “the product owes its crucial features to the application of the protected process”.

The provision of Article 64 of the IPL establishes certain rules of evidence that permit us to determine in which cases the patent protection would be extended. Its section 2 lays out a presumption that a product, which can be obtained through a produced process, has been obtained through that process. Firstly, we need to point out the nature of such a presumption: it is rebuttable (praesumptio iuris tantum), thus it is a person accused of a patent infringement who must prove that the given product has been obtained through other processes. Therefore, the burden of proof is reversed: while, under the general principle expressed in Article 6 of the Act of April 23, 1964 – the Civil Code, the specific fact must be proven by the person who derives from this fact particular legal consequences, in this case, the burden is carried by a defendant.

The presumption in question would apply in two cases:

1. With regard to new products:

The first instance is relatively clear; it is necessary to underscore that it refers to  technical or market novelty, instead of novelty understood as one of the patentability criteria listed in Article 25 of the IPL.

2. With regard to other products, if a right holder demonstrates that he or she was not capable of finding out, despite making every reasonable efforts, the process actually used by another person for obtaining the product:

As for the second case, it is of utmost importance to determine what actions can be potentially considered as “reasonable efforts for finding out the process of production”. Du Vall indicates that such an evaluation shall be carried out by a court, which should rely in particular on an assessment of technical possibilities for finding out the process of production in the light of the resources available to the right holder.  Michalak points out that, “the more actions of a legal or factual nature are undertaken by a right holder in order to find out the process of production applied by an infringer, the greater are the chances that the court would consider them as reasonable efforts” (as examples of such actions he offers, i.a., investigating official registries, commissioning opinions of experts, using the procedural instruments, such as securing of evidence). The Appellate Court in Warsaw in the aforementioned judgment of November 15, 2004 concluded that, at the same time, “there are no grounds for assuming that the efforts referenced in Article 64 Section 2 of the IPL shall be carried out solely by the right holder — directly or in person.”

It is worth underscoring that such a design of the rules of evidence that we encounter in the IPL is derived, to a large extent, from the Agreement on Trade-Related Aspects of Intellectual Property Rights of 1994 (TRIPS), whose Article 34 Section 1 clearly states that Members shall provide, in at least one of the following circumstances, that any identical product when produced without the consent of the patent owner shall, in the absence of proof to the contrary, be deemed to have been obtained by the patented process: (a) if the product obtained by the patented process is new; (b)  if there is a substantial likelihood that the identical product was made by the process and the owner of the patent has been unable through reasonable efforts to determine the process actually used. The only major difference that can be noticed is the omission of the requirement of “a substantial likelihood” with regard to the second case in the Polish legislation; this way, its demonstration under the IPL has been facilitated.

The Polish legislator formulates a directive that in the process of presenting a rebuttal evidence a legitimate interest of the defendant in the protection of their manufacturing and trade secrets shall be taken into account (Section 3). In reality, this provision would not play any major role: as du Vall notices, the protection of the defendant established by Article 64 Section 3, would be “limited by the requirements of evidentiary proceedings”: if a defendant refuses to reveal the process of production, the court would have to assume that an infringement did in fact occur.

The provision of Article 65 addresses a special case of the indirect patent protection: according to that rule, a patent for an invention related to use of a substance, belonging already to the state of the art, for obtaining a product that has new use, covers also products specifically developed, accordingly with the invention, for such use. This regulation mirrors the specificity of the pharmaceutical sector, and above all it addresses the question of second and subsequent medical uses.

The expression: “a patent for an invention concerning use of a known substance for obtaining a product that has new use” sends us back to Article 25 Section 4 of the IPL, under which it is possible to obtain a patent for an invention concerning a substance or a composition, comprised in the state of the art, for use or for use in strictly designated manner in the methods for treatment or diagnostic methods, as long as such use does not belong to the state of the art (to put it more simply, if an X medicine in the light of the “regular” criteria of patentability could not be deemed to fulfill the requirement of novelty, it still could be patented, provided that, for instance, it is applied for new medical indications or in a treatment of a new, non-obvious group of patients).

A patent whose subject matter comprises so-called second use, would be a source of the extended protection encompassing the products which:

1. Have been developed accordingly with the invention, and

It is worth adding that in this case the rules of evidence formulated by the legislator in Sections 2 and 3 of Article 64 do not apply. The presumption discussed above is not relevant here; the burden of proof is carried by a patent holder. It seems that Michalak is right when writing that the protection in the context of new uses of substances is far weaker than the protection granted by Article 64.