The launch of the Unified Patent Court (UPC) is quickly approaching. With 24 EU Member States within its jurisdiction, it will be exclusively competent in matters relating to validity and infringements of the European patents with unitary effects, European patents and supplementary protection certificates granted for inventions protected by such patents. We have previously indicated in our publications that it should be expected that the unitary patent system will have major repercussions also for businesses from states that have decided to remain outside it — for instance, Poland. Entrepreneurs from such countries will still be eligible for applying for the grant of the unitary effect to their European patents and they will be able to seek protection before the UPC. Moreover, if their goods or services are present in a territory of any of the states participating in the system, they will have to manage the risk of a potential infringement of a unitary patent and the resulting initiation of proceedings against them before the UPC. 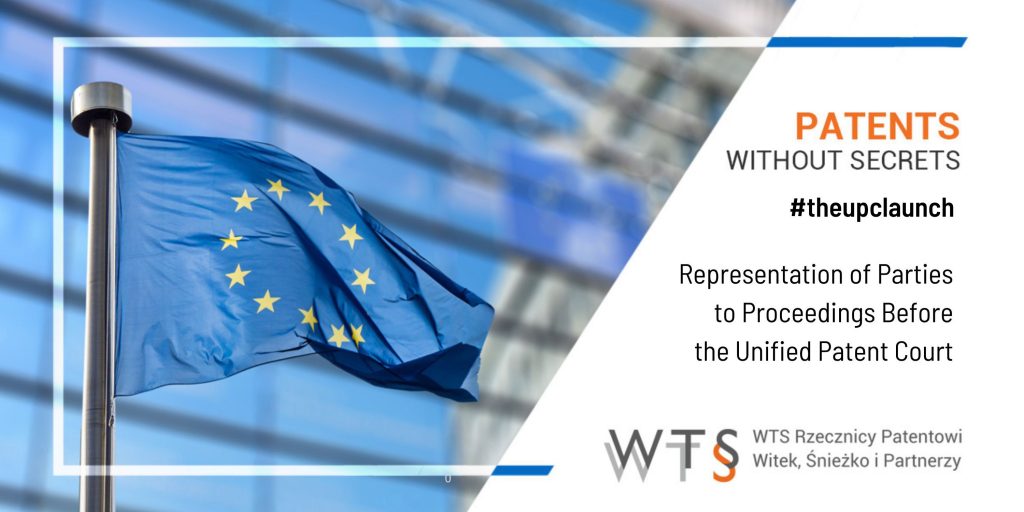 We present you the second entry in our series of articles dedicated to various aspects the procedure before the Unified Patent Court. We have written already about the protective letter as a means of protection available to a person who might be accused of a patent infringement (see: Patents Without Secrets No. 2/2022). This time, we would like to focus on a different topic that has considerable practical significance: the eligible representatives of parties before the UPC. As we will see, the UPC Agreement introduces some important requirements in that respect. The professional legal representation is obligatory and we can distinguish two categories of entitled representatives. The first category, much broader, comprehends representatives from the Contracting Member States: lawyers authorized to practice before domestic courts of such states. Meanwhile, the second category would concern representatives from states who are not parties to the UPC Agreement, such as Poland, and this group would be significantly narrowed: it would consist only of European patent attorneys who can demonstrate appropriate qualifications. In this article, we would like to offer you a closer study of the legal regime applicable to that issue.

First, however, a few words about the recent progress in the preparation for the launch of the UPC.

The preparation for the launch of the UPC: an update

Pursuant to Art. 89 of the Agreement, it shall enter into force on the first day of the fourth month after the deposit of the instrument of ratification by Germany — which, in turn, is expected to take place once the UPC becomes operational. Right now we are in the midst of the preparation phase that commenced when Austria deposited its instrument of ratification as the thirteenth of the Contracting Member States in January 2022.

It seems that the earlier predictions that the launch could occur in the final quarter of 2022 or in early 2023 need certain correction due to the lengthy development and implementation of a dedicated IT system: right now, mid-2023 seems a more realistic deadline. It does not, however, change the fact that in last months some substantial progress has undisputedly been achieved.

A number of important steps were undertaken especially during the recent meeting of the Administrative Committee which took place in Luxembourg on the 8th of July. We should take note of the presentation of the list of the most suitable candidates for judges by the Advisory Committee (interviews with candidates were held in spring). The final version of the Court’s Rules of Procedure and its Table of Fees were adopted and they are now in force since the 1st of September. The locations of local and regional divisions of the Court of First Instance were confirmed. Moreover, such practical matters as medical and social insurance of the UPC’s employees were being handled.

The obligatory character of the legal representation

Moving on to the legal regime governing the representation before the UPC, we should first of all point out that the professional legal representation is considered obligatory. Any procedural actions by parties can be performed through their representatives.

First, the Art. 48(1) of Agreement indicates that parties can be represented by lawyers authorized to practise before a court of a Contracting Member State.

Thus, the Agreement refers to domestic rules of individual states participating in the unitary patent system. It is their domestic law that determines who can act as a representative before the UPC.

For instance: if Poland was one of the Contracting Member States, this question would be governed by Art. 87.1(1) of the Act of 17 November 1964 – the Code of Civil Procedure, which states that in proceedings in intellectual property cases parties should be represented by attorneys, legal counsels, and patent attorneys. Furthermore, this role can also be performed by a representative of an organization whose statutory functions include supporting industrial property and providing assistance to inventors of inventive designs (Section 4). The exemption from the requirement of the professional representation applies in cases where the amount in dispute does not exceed 20,000 PLN (Section 2); also the court can decide to exempt a party, upon their request or ex officio, if circumstances, including the complexity of the case, do not justify the professional representation (Section 3). This rule will not apply here for a simple reason of Poland’s decision to stay outside the unitary patent system. The eligibility of Polish representatives to act before the UPC is, thus, determined by Article 48(2).

that are not the UPC Contracting States

It should be underscored that this provision would have critical importance for determining the position of representatives from those states which are parties to the EPC but have not joined the unitary patent system: both EU members (e.g., Spain and Poland) and non-members (e.g., the UK and Switzerland).

a) the status of the European patent attorney

This time, the UPC Agreement refers not to domestic regulations, but to the EPC.  Art. 134 of the Convention specifies who can be a European patent attorney, i.e., who can represent natural or legal persons in proceedings established by the EPC. The conditions of the entry on the list of professional representatives, which is administered by the EPO, are: a nationality of a Contracting State, a place of business or employment in a Contracting State, as well as passing of the European qualifying examination (Section 2).

At the same time, Article 134(3) introduces a so-called “grandfather clause” offering a waiver of the examination requirement, a path quite commonly resorted to. In each Contracting State during a period of one year from the date of its accession to the EPC (in the case of Poland, this period started its run on the 1st of March 2004), entry on the list of European patent attorneys can be requested by any natural person — a national of such a state, having there their place of business or employment, and entitled to represent natural or legal persons in patent matters before the central industrial property office of that State. If such entitlement was not conditional upon the requirement of special professional qualifications, that person had to demonstrate that they had at least five years of relevant experience.

The status of the European patent attorney is necessary but in and of itself insufficient to be entitled to act as a representative before the UPC. Art. 48(2) lays down an additional and essential requirement of appropriate qualifications.

b) having appropriate qualifications

The UPC Agreement authorized the Administrative Committee to establish the requirements for qualifications pursuant to Art. 48(2). The Administrative Committee, acting on the basis of this delegation, on the 22nd of February 2022 issued a decision in which it provided specific rules regarding the acquiring of the European Patent Litigation Certificate. The decision is in force since the 15th of June 2022. It sets three alternative paths for obtaining by European patent attorneys “appropriate qualifications” which are the prerequisite for the entitlement to represent parties before the UPC.

Rule 2 of the Decision provides that the Certificate can be obtained only by European patent attorneys who have successfully completed a course on European patent litigation. It should be emphasized that the Certificate can only be issued by accredited universities and other non-profit educational bodies of higher or professional education established in a Member State of the EU (thus, it does not have to be a state that is a party to the UPC Agreement). Also the UPC’s Training Centre in Budapest has been granted a power to grant the Certificate. The Decision describes a specific accreditation procedure (Rules 6-8).

It also lays down certain requirements regarding the Course. The content of the Course is specified in the Decision — it shall comprise, i.a., a general introduction into law, including European law,  the role, organisation and patent-related case law of the Court of Justice of the European Union, unitary patent protection in the EU, the operation of the UPC and litigation before it (Rule 3). The Course should consist of at least 120 hours of lectures and practical training and it shall be concluded by both a written and oral examination (Rule 4).

Furthermore, in accordance with Rule 11, European patent attorneys who hold a bachelor or master degree in law (or who have passed an equivalent state exam) shall be deemed to have appropriate qualifications pursuant to Art. 48(2) and they may apply for registration on the list of entitled representatives.

One of the key solutions envisioned by the Administrative Committee’s Decision involves the establishment of the transitional period (Rule 12). Its duration will be one year from the entry into force of the UPC Agreement, which — as we have indicated earlier — has yet to occur. The Decision introduces, therefore, its own “grandfather clause”.

Namely, the requirement of having appropriate qualifications shall be deemed satisfied by a European patent attorney who has successfully completed one of the courses or has been granted one of the certificates listed in the Decision. The Decision lists 13 recognized courses/certificates. Among them, there is, e.g., course “Zusatzstudium Gewerblicher Rechtsschutz“ at Humboldt University of Berlin and course “Corso di Perfezionamento in Brevettistica” at the University of Milan. Importantly, the list features not solely courses offered by educational institutions in the UPC Agreement’s Contracting Member States. Appropriate qualifications can also be acquired, for instance, by obtaining certificate in intellectual property law at the Queen Mary University of London. The Administrative Committee also included on the list a course offered by one of Polish academic entities — Postgraduate Course on Industrial Property Law at the University of Warsaw. There is a time limit imposed with respect to certain courses, e.g., the course offered at Queen Mary University of London: such courses should have been completed before the 31st of December 2020 — importantly, this condition does not apply to the course at the University of Warsaw.

Alternatively, a “grandfather clause” can be invoked by a European patent attorney who has appropriate experience, i.e., they have represented a party on their own or acted as a judge in at least three patent infringement actions initiated before a national court of a Contracting Member State within the five years preceding the application for registration.

Let us add that the Decision establishes also a procedure for the registration of the entitled representatives. The list of European patent attorneys eligible for acting before the UPC shall be kept by the Registrar (Art. 48(3) of the UPC Agreement). A European patent attorney lodges their Certificate with the Registrar if it holds one; or files a request for recognition of other appropriate certifications pursuant to Rule 11 or 12. The request is examined by the Registrar who may, if they deem it necessary, consult the Advisory Committee for an opinion.