Know-how, technological knowledge developed by an enterprise in a particular field, is not protected under the industrial property law, and yet it might play a considerable role when it comes to keeping inventions safe from unauthorized use by third parties. In this article we will present you the definition of know-how, as well as a catalogue of claims that an entitled person can raise in case of an infringement, and we will try to characterize the links between the protection of the business secrets and the patent protection. 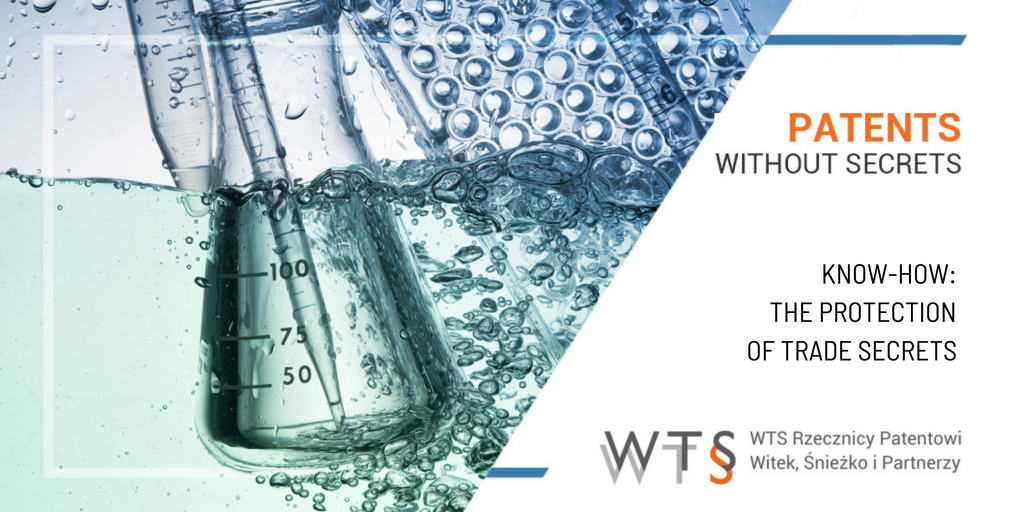 At the beginning of this article, let us clarify certain terminological ambiguities. The term “know-how” is often used interchangeably with the term “trade secret”. We should, however, remain cautious, as “the scopes of both terms overlap but are not identical,” as explained by professor Szwaja in a commentary to Act of 16 April 1993 on Combatting Unfair Competition (ACUC). Know-how as a generalized category encompasses nonconfidential know-how — information publicly known, as well as undisclosed know-how — protected under the ACUC; that latter category can be understood as identical to trade secrets, however, the use of this term, as a rule, serves to emphasize “the technical aspects of given knowledge”. A valuable point of reference, that could be helpful in dispelling certain doubts we might have in this regard, is Directive (EU) 2016/943 of the European Parliament and of the Council of 8 June 2016 on the protection of undisclosed know-how and business information (trade secrets) against their unlawful acquisition, use and disclosure: it distinguishes between two kinds of trade secrets (trade secrets as the broadest category), which are know-how and undisclosed business information.

The key conclusion that emerges from this semantics (which might seem quite confusing) is that know-how would be protected under legal rules that concern trade secrets.

Definition in the Polish legal system

A detailed regulation in Polish law can be found in Article 11 of the ACUC, pursuant to which, disclosing, using, or acquiring information that constitutes business secrets shall be considered acts of unfair competition (Section 1). The following Section states that a business secret shall be understood as technical, technological, organizational information of a company, as well as other information of a commercial value, which as a whole or in a particular configuration or a set of its elements is not publicly known to persons usually dealing with this kind of information or is not easily accessible to these persons, provided that a person authorized to use information or dispose of it, has taken, with due diligence, steps to keep it confidential (Section 2).

The legal definition consists, therefore, of three elements — in order for given information to qualify as a business secret it has to fulfill three following criteria:

a) Information is confidential (it is to say, it cannot be “such information that a subject interested in it can find out its content in a customary and legal manner” — see: the judgment of the Supreme Court of 5 September 2001, I CKN 1159/00);

b) It is of a commercial value (as we can read in the commentary edited by professor Szwaja, “every infringement of someone else’s confidential information that affects the value of a business in the market or an infringement that causes a measurable damage to a particular entrepreneur constitutes an act of unfair competition”);

c) It has been subject to appropriate (reasonable) steps in order to be kept confidential (this requirement will be construed in the context of relevant circumstances, such as the character of information, as well as a circle and character of persons who can access it).

The definition in the European law

For comparison, it is worth referring also to a definition of know-how in the European law which is often cited in the literature. We can find it in Regulation (EU) No 316/2014 of 21 March 2014 on the application of Article 101(3) of the Treaty on the Functioning of the European Union to categories of technology transfer agreements. Pursuant to Article 1 Section 1(i), know-how means a package of practical information, resulting from experience and testing, which is:

The standard under the TRIPS Agreement

Let us add that the Agreement on Trade-Related Aspects of Intellectual Property Rights (TRIPS) also applies to the protection of know-how, namely its Article 39 prescribes that Members shall protect undisclosed information. On the TRIPS level, an autonomous definition of protected information is also provided: it is secret information which has a commercial value and has been subject to reasonable steps under the circumstances to be kept secret. Despite differences between the standard of protection under ACUC and the one resulting from the TRIPS, the measures undertaken by the legislator in order to implement the above-mentioned directive 2016/493 led to the removal of inconsistencies.

A key issue that must be addressed is the existence of a particular repertory of measures available in cases of know-how infringements. Returning to the level of the regulation in Polish law, we have to underline that when it comes to acts of unfair competition it is possible to pursue civil or criminal liability.

As for civil path, the statute provides that an entrepreneur whose interest has been threatened or infringed upon, can raise the following claims:

– removal of the effects of prohibited activities;

– compensation for damage, under general rules,

– payment of an appropriate amount of money for a specific public purpose related to supporting Polish culture or the national legacy (applicable only to acts of unfair competition that were caused by fault) (Article 18 Section 1).

Specifically with regard to the infringement of business secrets, the ACUC provides some additional sanctions, such as public disclosure of the judgment or its content (Section 3); in certain circumstances, upon the defendant’s request, the court can oblige him or her to pay appropriate reimbursement to the plaintiff (Section 4). The plaintiff can as well, acting on their own initiative, instead of demanding compensation determined under general rules, demand compensation through payment of an amount of money that would be equal to reimbursement that in the moment a claim is brought would be due for consenting by them to use information constituting a business secret (Section 5).

When it comes to criminal law liability, disclosure to other person or use in one’s own business activity, in a violation of an obligation towards an entrepreneur, of an information constituting a business secret, is subject to a fine, restriction of freedom or up to 2 years of imprisonment (Article 23 Section 1). And whereas in the case of persons who violate their obligations towards an entrepreneur it is necessary to demonstrate that an infringement of the secret causes substantial damage, this requirement does not apply to those who come into possession of such information illegally (Section 2). Finally, a person who discloses or uses information constituting a business secret that they obtained while taking part in a court hearing or other actions in judicial proceedings concerning claims stemming from an act of unfair competition involving an infringement of a business secret, or obtained by accessing files of such proceedings, if the proceedings are non-public, shall be punished as well (Section 3).

To a certain extent, the know-how protection and the patent protection can be considered competing ways for keeping an invention safe. It is, therefore, worthwhile to compare them succinctly in that regard.

The key difference is related to the fact that the know-how protection does not depend on filing of an application. It might be found quite appealing since, contrarily to patent proceedings, it is not necessary to publicly disclose the solution developed. No certificate is issued — any counterpart of a patent document is not necessary.

In the case of know-how there are no time limits typical to patents: let us remind you that patents expire 20 years after the date of filing of an application with the Polish Patent Office.

At the same time, it must be emphasized that patents grant significantly stronger protection. They protect patent holders not only against illegal infringement but also, and maybe most of all, against situations wherein another inventor independently develops their own version of a particular product or process (for example, through reverse engineering). Moreover, the protection of secret requires the establishment of an efficient system of circulation of information in an enterprise and effective mechanisms preventing an unauthorized access — it cannot be ruled out that the expenses of keeping information confidential would exceed those involving the patent procedure and periodic fees for the renewal of protection.

Each of those paths of protection has certain advantages and disadvantages. The choice of the one that is appropriate cannot be made in abstracto, in isolation from circumstances of a given situation, without taking into account who is an inventor and for what invention they are seeking protection.