Under Article 66 Section 2 of the Act of 30 June 2000 – Industrial Property Law (hereinafter as IPL), a patent holder can give to another person a contractual authorization (a license) to use their invention (a licensing agreement). In this article in the series “Patents Without Secrets” we would like to present you the key information regarding licensing agreements in the Polish patent law: what is the nature of those agreements, what should be included in them, what are the requirements regarding their form, and what types of licensing agreements can be distinguished.

As it is indicated in the commentary to the IPL edited by Professor Sieńczyło-Chlabicz, granting of a license is “one of the most essential economic uses of an invention,” thus it is undoubtedly a subject that demands our attention. 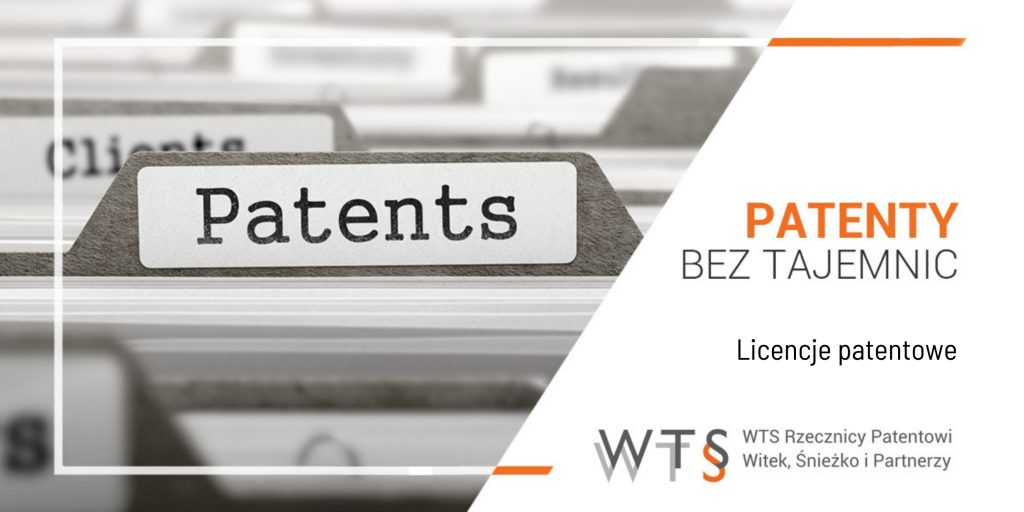 The characteristics of a licensing agreement

To describe some general features of a licensing agreement, we have to remark that it constitutes a contract that is nominate (defined in the IPL), consensual (founded on the mere unanimous agreement of parties), and causal (it is a legal act whose validity depends on existence and legality of the cause for its undertaking). A licensing agreement produces obligatory effects, however, as Professor du Vall claims in “Patent Law,” above all, it shall be considered a dispositive contract — in his opinion, this question that had once raised some serious doubts among legal scholars, was settled definitively by Article 78 of the IPL, which provides that in case of a transfer of a patent with regard to which a license was granted, the licensing agreement remains in force towards the legal successor.

In matters not covered by the IPL, we would apply to licensing agreements the provisions of the Act of 23 April 1964 – the Civil Code (hereinafter as CC). Thus, the key principle of the freedom of contracts would be relevant in their context (Article 353(1) KC). The contracting parties can shape their legal relation at their discretion, unless its content or purpose do not oppose the properties (nature) of the relation, law, and principles of social coexistence. The application of provisions of the CC to licensing agreements means that the responsibility for improper performance of the obligations would be determined in accordance with the general rules of the CC.

What should be included in the licensing agreement?

A given contract can be qualified as a licensing agreement if it contains an authorization to use an invention. Du Vall claims that it is the only element that can be considered essentialia negoti (the minimum content) of this kind of agreement. Sieńczyło-Chlabicz adds one more element of the same status: the use of a patented invention by a licensee in the scope defined by the authorization, besides indicating other contents mentioned in the literature, such as an obligation of a licensor to undertake actions necessary for safeguarding the right. In the commentary by Sieńczyło-Chlabicz the most common clauses of licensing agreements are listed, such as, i.a., transfer of copies of patent documents and other indispensable information; terms regarding a payment or lack thereof; an obligation of a licensee to inform a. licensor about instances of patent infringements; as well as, e.g., an obligation of a licensor to carry out a training of a licensee’s staff in the scope necessary to use a given solution in accordance with the invention.

The form of a licensing agreement

Under Article 76 Section 1 of the IPL, the licensing agreement requires a written form under pain of nullity. The legislator chose an ad solemnitatem sanction for agreements concluded without respecting this requirement — they would not produce any legal effects.

Entry in the patent register

It is possible to apply for an entry to the patent register — such a motion can be submitted by an interested party (Article 76 Section 6), meaning a licensor or a licensee, as well as — as it has been pointed out in the literature — another person that demonstrates their legal interest in disclosure of the license. The rule provides that in case of an exclusive license entered into the register, a licensee can pursue claims arising from patent infringements on the same rights as a patent holder, unless the agreement provides otherwise — besides that, the significance of an entry is rather limited: it is declaratory and optional, and does not affect the validity of a licensing agreement.

The classifications of patent licenses

B) By a criterium of number of authorised persons

In case of exclusive licensing agreements, it is prohibited to grant further licenses to other persons (Article 76 Section 4). Nonetheless, if an agreement does not contain an express exclusivity claim, we assume that we are dealing with a non-exclusive license — a licensor is free to grant subsequent licenses. The doctrine recognizes also an internal division among exclusive licenses, as du Vall points out: they can be “strong” (exclusive licenses) and include an obligation of a licensor to refrain from using their invention, and licenses providing that a patent holder maintains their right to freely use the invention (sole licenses). Should a licensor breach terms of exclusivity, a licensee might pursue contractual liability claims.

C) By the scope of minimum duties of a licensor

The criterium of a licensor’s duties provides the basis for a distinction between passive and active licenses. When it comes to the first of those categories, as du Vall writes in “Patent law,” “the performance of the right holder is limited to the minimal content of the agreement, i.e., tolerating the use of an invention by a licensee (and maintaining the patent in force)).” If we are dealing with an active license, a licensor would be charged with some additional obligations, which can be imposed either by terms of the agreement, or by law. It is particularly important to take note of Article 77 of the IPL, according to which if a licensing agreement does not provide otherwise, a licensor is obliged to transfer all the information and technical experience necessary for the use of the invention that he or she is in possession of at the moment of concluding the agreement.

Considering the presumption formulated in Article 77, as a default rule, the Polish legislator considers licensing agreements to fall into the category of active licenses.

Another interesting category encompasses open licenses, yet first of all, we must consider the clarification introduced in the commentary edited by Sieńczyło-Chlabicz: rather than being an autonomous type of licensing agreements, open licenses shall be understood as a special mode for concluding licensing agreements. Under Article 80, a patent holder is allowed to file with the Polish Patent Office (hereinafter:the  PPO) a declaration of their readiness to grant a license for the use of their invention — such a declaration cannot be withdrawn or modified (Section 1); furthermore, it is subject to an entry into the patent register (Section 2). The legislator offers a measurable financial benefit for a right holder who decides to make the declaration: it results in the cut of periodic fees that they are charged for protection of their invention by a half (Section 3).

In case of open licenses, relevant provisions of law establish two forms in which they might be granted: either through (1) concluding a licensing agreement, or (2) starting to use an invention before entering into negotiations or before their conclusion — so per facta concludentia (in an implied manner); nonetheless, the second mode comes with an additional requirement: a licensee is obliged to inform a licensor in writing about it within a month since he or she starts using the invention (Section 5).

As for the characteristics of an open license, it must be underscored that is a full and non-exclusive license (Section 4).

A case regulated by the provision of Article 81 is related once again to a mode of concluding a licensing agreement, rather than to a separate category of a license. Its main role is to establish a legal presumption: unless otherwise provided in the agreement for conducting research or other similar agreement, it is assumed that a contractor granted to a contracting authority a license to use inventions included in the results of the research submitted. It is a rebuttable presumption, so it can be contested by parties. If a content of an agreement for conducting research or other similar research does not permit us to determine the scope of a license, it should be considered as full and non-exclusive, as observed in the commentary by Sieńczyło-Chlabicz.

The legislator allows for granting further licenses by a licensee, however only with a consent of the licensor (Article 76 Section 5); such a consent should be expressed in writing under the pain of nullity. Sublicensee, at the same time, is prohibited from granting further sublicenses — thus, as du Vall remarks, only two levels of contracts are permissible: a licensing agreement and a sublicensing agreement.

Licensing agreements can be paid or gratuitous; when the contract does not contain any terms pertinent to that question, it shall be considered gratuitous. In practice, many forms of payments are employed with regard to licensing agreements, among which a manner of determining an amount of fees as a certain ratio of benefits gained by a licensee is particularly popular (a variety of royalties). Contracting parties enjoy a large extent of discretion, since the IPL does not contain any detailed rules with regard to license fees, with only one notable exception. It is worth to note that when it comes to open licenses, an upper threshold of the amount of the fee is imposed: it cannot exceed 10% of benefits obtained by a licensee in each year of the use of an invention after deduction of expenses.

An expiration of a licensing agreement

A licensing agreement can be concluded for a specified or unspecified period of time, while, as the provision of Article 76 Section 3 prescribes, a license expires at the latest at the moment of the expiration of the patent. A different legal regime would apply to provisions of the contract other than the license, including in particular non-gratuitous performances necessary for the use of an invention — the contract can remain binding in that scope, but, of course, it would no longer be considered a licensing agreement.

On the grounds of Article 79, the provisions concerning licensing agreements should be applied accordingly (accordingly, so with a certain margin of an interpretative liberty — as the Provincial Administrative Court in Kielce indicated in its judgment of 21 March 2013 in the case II SA/Ke 119/13, “to apply rules accordingly means either to apply them directly or with modifications”) to two other kinds of contracts:

In consequence, we are dealing here with a category of agreements authorising the use of a non-patented invention labeled as know-how (The Supreme Administrative Court in the judgment of 31 July 2003 in the case III SA 1661/01 defined know-how as a “set of confidential information, essential and identified in a proper form”). It must be added that this rule is considered ius dispositivum — contracting parties are free to shape their legal relation differently.