The patentability requirements have already been extensively covered in our publications: let us remind you that according to Article 24 of the Act of 30 June 2000 – Industrial Property Law (hereinafter: IPL), patents are granted for inventions that satisfy the criteria of novelty, inventive step, and industrial application. As for novelty, more detailed rules for its assessment are provided with regard to pharmaceutical inventions. Restrictive interpretation of that condition, without any adjustments, would permit for patenting only substances and compositions that are completely new and have not been known before. In that case, however, the requirements for inventions are to a certain extent different: novelty has to be understood in a specific way, and the possibility of obtaining a patent protection is extended to so-called first and second or subsequent medical use. This matter has been dealt with frequently in the caselaw of the European Patent Office’s (EPO) Boards of Appeals, and since it quite often raises some major doubts in practice, we would like to offer you a series of articles in which we would like to guide you through it.

In this article we are presenting general information regarding novelty of pharmaceutical products. Soon we will be successively publishing texts elaborating on some particular issues addressed here, i.a, how to account for differences between the European and American jurisdiction in the manner that we formulate patent claims; and what trends are revealed by some important decisions of the European courts in that area. 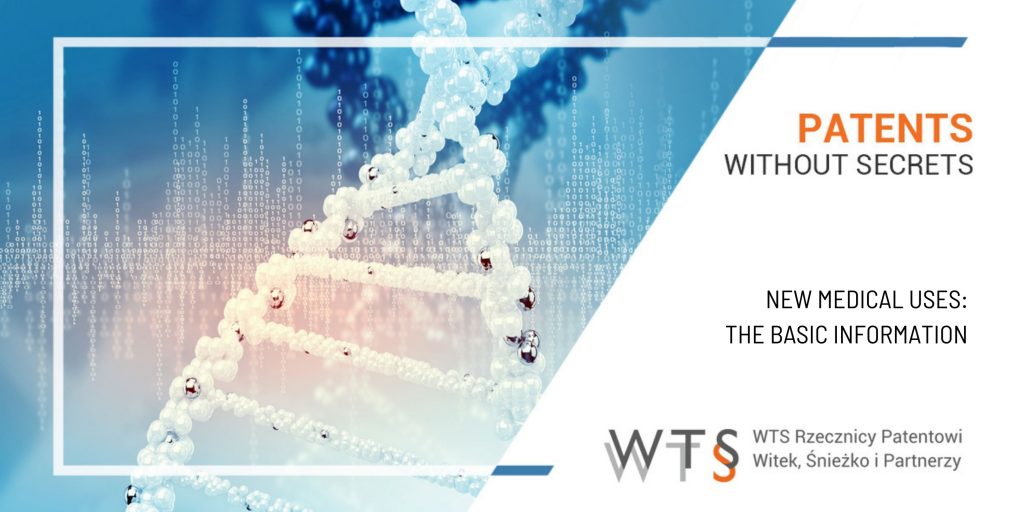 The basis in the European Patent Convention

It is worth to be aware of the fact that even though before Article 54 paragraph 5 was added to the EPC, there had been no legal basis for the protection of second and subsequent medical uses of products, in reality it had been allowed. A common way of circumventing the provisions formerly effective was the use of “Swiss-type claims” that would take the form of “the use of product X for the manufacture of a medicament for the treatment of disease Y”. The amendment of 2000 established thus normative grounds for a familiar practice existing before.

The basis in the Polish law

In the Polish legal system the permissibility of the grant of patents for medical uses is addressed in Article 25 Section 4 of the IPL that states: “Provisions of Sections 1-3 do not exclude permissibility of granting of a patent for an invention related to substances or compositions comprised in the state of the art for a use or for a use in a specific way in methods of therapy or diagnostics, that are referred to in Article 29 Section 1 point 3 [methods for treatment of humans or animals by surgery or therapy and diagnostic methods practised on humans or animals], provided that such a use is not comprised in the state of the art.” In other terms, in the particular case of new medical uses, there is a relaxation of requirements regarding novelty that are established in provisions of Article 25 Sections 1-3.

Moreover, it is worth noting that a possibility of obtaining a patent for second and further medical uses had existed in the Polish legal system before it was introduced into the framework of the European patent system (as du Vall describes it, the Polish legislator anticipated a situation that emerged later, which is after the entry into force of the EPC amendment of 2000), however, despite compatibility of general rules in that area, for some time the Polish provisions remained unharmonised with the EPC regulations: the earlier version of Article 25 Section 4 did not mention compositions, and permissibility of granting of a patent was not limited to instances of a use of a product in therapy or diagnostics. On account of the amendment that became effective on 1 December 2015, the above-mentioned discrepancies have been removed.

First use versus second and subsequent uses

We are therefore dealing with two situations involving therapeutic products wherein the threshold of novelty is lowered: on the one hand — first medical use, and on the other — second and subsequent medical uses. The differences between them can be clearly illustrated by a reference to two real life examples.

Speaking of the first medical use, we can mention, for instance, the case of nitro-glycerine which was known since 1847, when discovered by an Italian chemist, A. Sobrero. For following decades it was employed as an explosive, until in 1879 an English physician, W. Murrell, published an article describing the application of this composition in a treatment of angina pectoris.

As for the second medical use, we can associate it with the classic case of aspirin. When in 1897 F. Hoffman succeeded in synthesising for the very first time stable acetylsalicylic acid in the laboratory owned by Bayer, it was applied to reduce fever, as an analgesic and anti-inflammatory medication (even though the properties of willow bark which contains acetylsalicylic acid were described as early as in Egyptian scrolls from the 16th century b.c. and it was recommended by Hippocrates himself!). Only in 1950 a suburban general practitioner from California, L. Craven, discovered its anticoagulant effect.

In the commentary to the IPL edited by professor Sieńczyło-Chlabicz, we read that the second medical use is a “specific category of pharmaceutical inventions, whose essence lies in finding a new therapeutic use for a substance or composition already known in medicine”. It is therefore an alternative path that permits to obtain a patent, when a substance or composition already fall within the state of the art (so, under general rules, they would not fulfil the novelty requirement), and at the same time, a patent for their particular use in therapy or diagnostics has already been granted (so it would not be the first use).

When it comes to the first use, the scope of protection might vary: it might be broad, if the therapeutic purpose of a substance or a composition is formulated in general, broad manner; however, it might also be the case that patent claims invoke certain precisely defined properties and therapeutic functions of a product. The limits of protection are determined by the way that patent claims are phrased. As for the second and subsequent uses, protection will be limited to a specified medical use, and in consequence, as du Vall observes, “a use of a product in other purpose would not constitute an infringement of a patent”.

What solutions can enjoy protection as second and subsequent medical uses

In order to demonstrate that a given medical use differs from the state of the art, we can refer to the following properties that are enumerated in the guidelines published by the President of the Polish Patent Office:

Relaxation of the novelty requirement and exceptions to patentability

The permissibility of patenting new medical uses applies only to substances and compositions employed in therapeutic and diagnostic methods that in themselves cannot be patented. This implies that a subject matter of protection is a product, not a method. At the same time, as du Vall points out, “if a substance belongs to the state of the art, the subject matter of the protection is not that substance as such, but its therapeutic use unknown previously (meaning in fact a previously unknown therapeutic method)”. This distinction, which might often seem elusive and not evident, has a significant impact on the proper format of patent claims.