Both Polish and international law provide certain institutions that — even though not extensively used in practice — allow to interfere with a patent holder’s exclusive right to use an invention. We would like to dedicate this entry in our cycle Patents Without Secrets to offer you an overview of the Polish regulation in the area of compulsory licenses.

This issue gains particular importance for instance in the context of an epidemiological  threats — we dealt with compulsory licenses with regard to the avian flu pandemic when the patent office in Taiwan issued such a license for Tamiflu. Currently, considering the ongoing (and already apparently approaching its finale) race for an effective SARS-COV2 vaccine, we might be confronted with situations where the entities developing such vaccines are forced to incorporate into their products solutions that are already protected by patents held by someone else — a question therefore rises how can we reconcile the public interest associated with the purpose of the research being conducted with individual rights of inventors. How can we guarantee that industrial property law, while keeping an inventor protected, does not impede launching health-, and lifesaving vaccines or medicines into the market? In cases of such a conflict of interests compulsory licenses might come in handy. 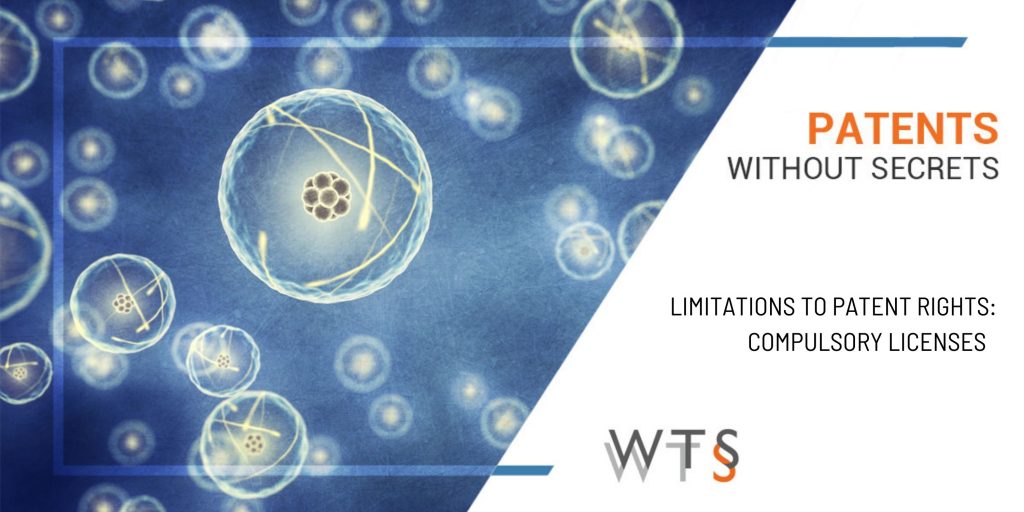 The definition of a compulsory license

At the level of the domestic law we can find the proper regulation concerning compulsory licenses in the Act of 30 June 2000 — Intellectual Property Law (hereinafter: IPL). The precise shape of currently binding provisions is a result of the performance of the obligations arising from the TRIPS Agreements and from acts of the European Union law by the Polish legislator.

Under Article 82, the term “compulsory license” shall be understood as a permission to use an invention patented by another person, that can be granted by the Polish Patent Office (hereinafter: PPO) in three enumeratively indicated cases: threats to national security, abuse of a patent and with regard to dependent patents.

We need to stay acutely aware that the name “license” might be misleading to a certain extent; we are not dealing with one of the licensing agreements at this moment. The rules pertaining to them do not apply here. As it is rightly pointed out in the commentary to the IPL edited by prof. Sieńczyło-Chlabicz, we are preoccupied in fact with “an extraordinary, compulsory form of an authorization to use a patented invention of third parties, that is given on the grounds of an administrative decision”.

Abuse of a patent

Abuse of a patent is defined by the doctrine, as M. du Vall remarks, as “an attempt to extend either the duration of a patent or its objective scope”. This premise concerns the situation defined by Article 68 of the IPL: a patent can be abused particularly by preventing third parties from its use when it is indispensable for satisfying the needs of the domestic market, especially when the public interest calls for it and a given product is not accessible to a public in sufficient amounts or of sufficient quality, or it is available for unduly high prices. In such cases, upon determining an abuse of a patent, the PPO can decide that it will be possible to apply for a compulsory license — it should make a proper announcement in its bulletin (Article 82 Section 3).

Under Article 82 Section 1(3), dependence of patents would occur when a holder of a patent for an earlier patented invention (original patent) makes it impossible, through their refusal to sign a licensing agreement, to satisfy the needs of the domestic markets that could be achieved by the use of the patented invention (the dependent patent), which encroaches on the scope of the original patent; in such a situation the holder of an original patent can request an authorization to use an invention protected by the dependent patent (cross-license).

A significant rule is introduced in Article 82 Section 2: a compulsory license in such a case can be granted only for an invention that displays an important technical development of a considerable economic significance. In The Patent Law by M. Du Vall it is highlighted that a purpose of subordinating this premise to such a requirement is “to prevent abuses of compulsory licenses”. It is further added that “a requirement of an important technical development and its considerable economic significance is highly arbitrary, it must be however assumed (…) that the PPO will have to determine that a solution protected by the dependent patent brings about a significant change in the state of art that leads to an improvement of parameters of given technical solutions, in particular to an increase in their utility”. When it comes to a considerable economic significance, “it could be manifested in a remarkable decrease in cost of production and a remarkable improvement in quality”.

Compulsory licenses for patents concerning the manufacture of pharmaceutical products

The catalogue of premises for the grant of a compulsory license must be completed by the case indicated in the Regulation (EC) No. 816/2006 of the European Parliament and the Council of 17 May 2006 on compulsory licensing of patents relating to the manufacture of pharmaceutical products for export to countries with public health problems (the act is directly applicable in the Polish legal system). The regulation in question establishes a procedure for the grant of compulsory licences in relation to patents and supplementary protection certificates concerning the manufacture and sale of pharmaceutical products, when such products are intended for export to eligible importing countries in need of such products in order to address public health problems (Article 1).

The condition of granting a license

In general, a compulsory license can be granted only after an applicant demonstrates that he or she has made previously efforts in good faith to reach a licensing agreement with a patent holder. Nevertheless, it must be emphasized that this condition does not apply when it comes to a compulsory license that is granted to prevent or eliminate threats to national security. Neither does it apply when an announcement that applications for such a license are accepted has been duly published (Article 82 Section 4).

A compulsory license cannot be granted in a situation wherein a patent holder agrees to enter into a licensing agreement but parties cannot reach a consensus when it comes to detailed conditions of the agreement.

The characteristics of a compulsory license

Importantly, a patent holder can still use their invention; just like other people with whom he or she has entered into licensing agreements.

The procedure for the grant of a compulsory license

A decision to grant a compulsory license is made by the Polish Patent Office in contentious proceedings. The PPO determines the scope, the duration of a license, specific conditions for its exercise, the amount of a license fee, the mode and deadlines of payments. Appeals against decisions are reviewed by the Provincial Administrative Court in Warsaw (Article 257). It is also provided that a decision concerning the grant of a compulsory license can be amended in its part related to the scope, the duration of a license or the amount of a license fee — however after two years from the moment of its issuance it can be done only in a specially justified case upon the request of a person who has an interest in it (Article 86).