We present you the third entry in our cycle “Patents without Secrets” that is dedicated to regulations related to patent procedure in the American jurisdiction. Many of our Clients express their interest in seeking patent protection in the USA, therefore we would like to provide you with all the essential information regarding proceedings before the UPSTO. Having discussed already such topics as provisional patent application and continuation in part of an application, this time we would like to take a closer look at yet another institution that is uncommon to other legal systems: a  Request for Continued Examination (RCE). 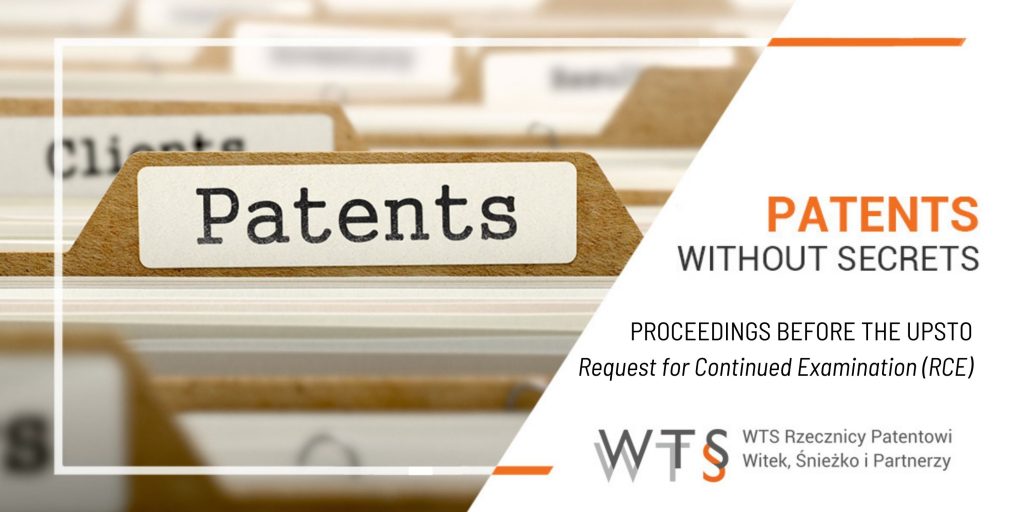 The rules pertaining to an RCE can be found in the Title 35 of the United States Code (Patents), where the provision of Section 132(b) provides a general basis for filing a request for continued examination. According to 35 U.S.C. 132(b), the Director of the UPSTO shall prescribe regulations to provide for the continued examination of applications for patent at the request of the applicant; it is also added that the Director can establish appropriate fees for such continued examination providing a 50 percent reduction in such fees for small entities that qualify for it in the light of relevant provisions of the Code.

More detailed rules are included in the Title 37 of Code of Federal Regulations (Patents, Trademarks, and Copyrights). The Manual of Patent Examining Procedure (MPEP) edited and published by the UPSTO provides as well a very valuable source of information when it comes to an RCE.

What is an RCE?

In order to explain what exactly is an RCE, let us begin by placing the filing of it on a timeline.

When a patent application is under review, an examiner designated by the UPSTO communicates with an applicant or their representative in writing; it is possible at this stage to introduce certain amendments to patent claims.

Usually, after 1-2 years, the examiner releases a Non-final Office Action that contains of a preliminary determination of patentability of a given invention with reference to the state of art. The applicant or their representative has to respond subsequently to the examiner’s report. The following step could involve release of the second report: Final Office Action, which despite having the word “final” in its name, does not actually close the examination once and for all. The applicant can still make decision to enter one of a few available paths: he or she can either file an appellation, prepare a continuing application, or actually submit a request for continued examination.

A request for continued examination can be made only once the prosecution in the application is closed — the prosecution is closed in particular if the last report issued by the examiner is the Final Office Action, however it is possible to file an RCE in case the examiner releases a Notice of Allowance, or when application is under appeal. An RCE at its core serves to reopen examination in those instances.

It has to be emphasized strongly: an RCE is not a new application and its filing does not lead to determination of a new filing date.

How a request for continued continued examination shall be made?

In order to file an RCE correctly, one has to take following actions:

Finally, we have to remember that it is not possible to include in an RCE any claims that are independent and distinct from the claims from the application in review. As it is highlighted in the MPEP, “switching” of inventions shall defineteply be ruled out.

Time frame for filing an RCE

We know already that the applicant can make a request for continued examination once the prosecution in the application is closed. Rule 37 C.F.R. 1.114(a) indicates when an RCE shall be filed at the latest, so as not be considered late. Once one of the following actions is taken, it shall be no longer possible to make such a request:

Whenever the applicant performs one of the following actions, the permissibility of filing an RCE shall be precluded.

When filing an RCE is not possible?

Provisions of 37 C.F.R. expressly name instances when the applicant is not allowed to request a continued examination. According to 37 CFR 1.114, such a motion is not possible in case of following applications:

An RCE and the running of time limits

We would also like to draw your attention to an RCE’s impact on running of time limits in the procedure concerning the application.

First of all, it is important to take note of a provision of 37 C.F.R. 1.103(c) which indicates that, on request of the applicant, the UPSTO may grant a suspension of the action for a period not exceeding 3 months. Such a request shall be filed along with an RCE and specify the period of suspension; moreover, it is necessary to pay a processing fee. This solution can prove advantageous for applicants who seek to gain some time — for example when they are forced to wait for results of specific research or experiments.

It is also necessary to bear in mind that an RCE which is improperly filed does not affect running of the time period set forth in the last Office Action — failing to submit it in assigned time, would be understood as abandonment of the application. On the other hand, if the application is under appeal, the improper RCE results in a withdrawal of the appeal.

A request for continued examination undeniably merits attention as one of the few specific institutions that we encounter when we engage in the proceedings before the UPSTO. Filed after the prosecution in the application is closed, an RCE serves us to reopen examination: its main asset in that field would be the fact that it permits to introduce far more extensive amendments into our application when compared to a standard reply to an Office Action. Often, whenever another option on the table involves filing an appeal, an RCE is considered as more beneficial solution because of its lower costs and shorter time necessary for its review.