In this article, we would like to discuss one of the issues that involves the patent law regulations in the area of biotechnology. Is it possible to grant a patent for a sequence of a gene? In other words, would it be possible to treat genes as inventions and if yes, then what conditions should be fulfilled for such a classification? The debate on this subject is full of controversies.

At the beginning, we would like to draw your attention to particular difficulties that arise when it comes to determining where a scientific discovery ends and an invention begins. Next, we will discuss the applicable legal framework in Polish and European legal systems, from where we will proceed to reflect on the possibility of satisfying the patentability criteria by sequences of a gene or partial sequences of a gene. We will conclude by discussing the landmark decision of the U.S. Supreme Court in the Myriad Genetics case which led in the American jurisdiction to the adoption of the approach that is fundamentally different from the European one. 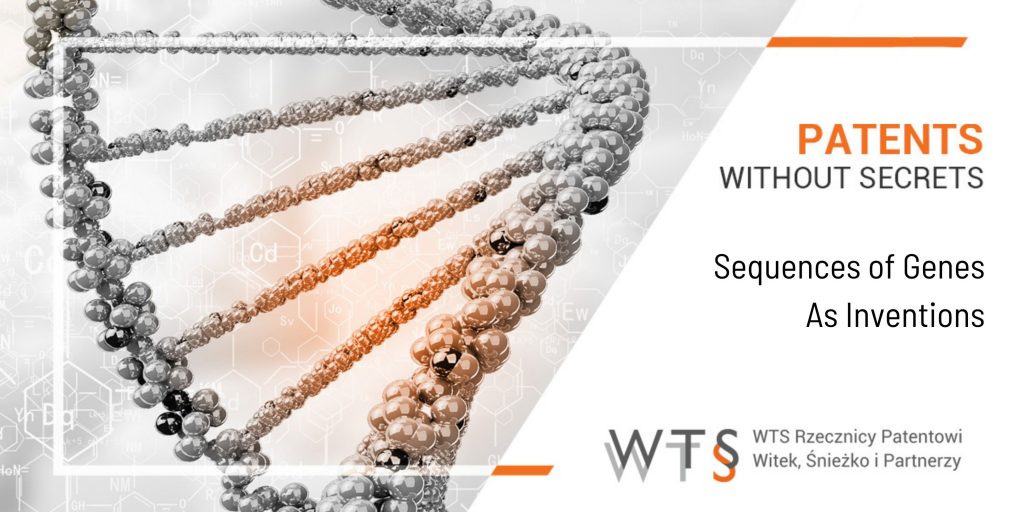 One of the cornerstone principles of the industrial property law is that the protection that inventions enjoy is not extended to scientific discoveries. In the context of genes, the status of those sequences that occur in nature seems particularly controversial. Whenever we are considering a biological material that occurs in nature, it is not possible to have it protected by a patent because, as Professor Du Vall emphasizes strongly in “Patent Law,” we are in fact dealing with a scientific discovery. “The natural products,” the scholar explains further, “can be patented only when a human input and interference can be demonstrated (e.g., when a substance is extracted in a pure form that does not occur in nature)”.

In the Guidelines of the European Patent Office (EPO) it is underscored that what is relevant for the patentability of a substance that has occurred previously in nature is the possibility of obtaining certain technical effect. Just like a microorganism can be patented as one aspect of an invention if it is used for manufacturing of a given antibiotic, a gene can also enjoy protection, for instance, if we can demonstrate its use in making a certain polypeptide or in gene therapy (Part G, Chapter II, 3.1).

Likewise, in the preamble of Directive 98/44/EC of the European Parliament and of the Council of 6 July 1998 on the legal protection of biotechnological inventions (the so-called Biotech Directive) we read that “a mere DNA sequence without indication of a function does not contain any technical information and is therefore not a patentable invention” (para. 23).

Of course, some doubts might arise as to whether the indication of a function should not be considered to constitute a discovery rather than an invention — this is what Professor Du Vall suggests and this view has been shared by the U.S. Supreme Court in its 2013 decision in Myriad Genetics. A key takeaway from this ongoing debate is that the case of the sequence of a gene is a borderline one and it reveals certain degree of arbitrariness of the distinction between discoveries and inventions.

These rules are mirrored in the Implementing Regulations to the European Patent Convention (Rule 29) as well as, within the Polish legal system, in the Act of 30 June 2000 – Industrial Property Law. In Article 93.2(1) of the Act, an illustrative list of the most typical patentable biotechnological inventions is provided. The list includes, i.a., inventions constituting an element isolated from the human body or otherwise produced by means of a technical process, including the sequence or partial sequence of a gene, even if the structure of that element is identical to that of a natural element.

The patentability criteria in the context of gene sequences

Regardless of the specificity of biotechnological inventions, the possibility of the grant of a patent still remains dependent on the fulfillment of the patentability criteria by them. Such conclusion is inevitable in the light of Article 3 of the Biotech Directive, pursuant to which for the purposes of the Directive, inventions which are new, which involve an inventive step and which are susceptible of industrial application shall be patentable even if they concern a product consisting of or containing biological material or a process by means of which biological material is produced, processed or used.

Likewise, the provision of Art. 93.1 of the Polish Industrial Property Law, introducing the definition of a biotechnological invention, is explicitly based on the general definition of an invention enshrined in Art. 24, therefore referring to the patentability criteria which are: novelty, inventive step, and industrial application.

How are we supposed to assess the fulfillment of this criteria with respect to sequences of genes?

As genes occur in nature, demonstrating that they meet the novelty requirement might pose a particular challenge. We should assume that the relevant state of the art would comprehend only the information that is publicly available before the priority date — it should be determined on the basis of concrete documents, rather than mere conjectures. Novelty would consist of 2 elements which are: (1) the information about the existence of the material; and (2) the indication of the method of its isolation.

A question arises as to how are we supposed to demonstrate an inventive step in a situation where gene sequencing has a routine character. In fact, the method of isolation would most often fail to provide us with a helpful point of reference (even though we can find decisions of certain patent offices and courts which concluded that, i.a., considering the lack of grounds to expect that the application of a given method would have been effective, the inventive step requirement should have been considered satisfied). According to some experts, it would be more appropriate to evaluate the inventive step through the prism of a gene structure — as Professor Du Vall writes, such an assessment would focus on finding whether a particular structure displays certain unexpected or surprising qualities. In such a case, it would be possible to claim that the structure was indeed not obvious to a person skilled in the state of the art. It should be added that in the above-mentioned decision in Myriad Genetics the U.S. Supreme Court dealt a blow to that approach as well — rejecting the evaluation of the inventive step on the basis of a structure as well as on the basis of the method of isolation.

The condition of the industrial application is quite obvious when it comes to other categories of inventions. As it is accurately pointed out in the commentary to the Polish Industrial Property Law edited by Professor Sieńczyło-Chlabicz, “in case of numerous traditional inventions (…) revealing of the industrial application of the invention does not cause difficulties or the difficulties are not significant as the use of the invention could be directly deduced from its name or description”. In the context of biotechnological inventions, this particular criterion of patentability becomes much more important.

The indication of a function of a given sequence or a partial sequence is what sets apart genes-related inventions from scientific discoveries, and it is on the basis of function that we would assess the fulfillment of the industrial application requirement. We should be, however, careful not to equate function with industrial application: to demonstrate industrial application one has to indicate at least one function; these two can be identical but do not have to. In the American as well as European jurisdiction it is accepted that the invention’s utility should be characterized by the following properties: it should be (1) specific (cannot be described in an excessively general manner); (2) substantial (it is not sufficient for an invention to be useful for further research, it must yield actual results), (3) credible (it can be confirmed on the basis of facts and through the application of the principles of logic).

It is necessary to take note of certain procedural requirements introduced by Art. 93.2 of the Polish Industrial Property Law in that area. Most of all, it must be underscored that in the application for the invention concerning a gene sequence or a partial sequence, the description of the invention shall reveal industrial application of the sequence, and, moreover, an independent patent claim shall also indicate a function performed by that sequence (Section 2). Also Rule 29(3) of the EPO Implementing Regulations provides that the industrial application of a sequence or a partial sequence of a gene must be disclosed in the patent application. On the level of the Polish legislation, that requirement is further elaborated with respect to two specific cases:

A) Sequences or partial sequences of a gene used to produce a protein or a part of protein — in the description of the invention it must be specified which protein or part of a protein is produced and what function it performs (Section 3; the corresponding rule can be found in the EPO Guidelines — G-III, 4)

B) Inventions relating to sequences or partial sequences of a gene that disclose nucleotide  or amino acid sequences — the applicant is supposed to submit a sequence listing in the electronic form in compliance with the WIPO Standard ST.26 (the current version of the standard is in force since 1 July 2022).

In the U.S., the approach to the patentability of sequences of a gene, as it was mentioned a few times already, is diametrically different from the European one. Until 2013, the grant of a patent for gene sequences was considered permissible as long as sequences have been sufficiently isolated from their “natural environment”.

The landmark judgment in the case of Myriad that involved the grant of patents for the sequences comprehending two human genes (BRCA1 and 2 — mutations in which are responsible for an increased risk of a breast or ovarian cancer), has brought about a substantial change in a way the American courts approach that problem. The isolation of genes from nature has ceased to be considered sufficient for the purposes of patentability. The U.S. Supreme Court held that DNA constitutes a product of nature and as such cannot be protected on the grounds of IP law. At the same time, it remarked that the status of cDNA (complementary DNA — DNA synthesized from a single-stranded RNA template through reverse transcription) would differ as cDNA is manufactured in laboratory.  The outcome of that judgment was the invalidation of more than 4,300 patents for human genes.

Of course, the change in the interpretation of American law does not produce any direct effects in the European jurisdiction — we must remember that the Biotech Directive explicitly allows for the grant of patents for sequences or partial sequences of a gene.