As we can read in “Patent Law” by Professor Du Vall, the economic and social rationales behind the IP law and the competition law are to a considerable degree convergent: “they are supposed to contribute to ensuring benefits for consumers and the effective allocation of the means of production”. The relation between these two fields of law remains, however, rather complicated: the scholarship has put forward different propositions on how it should be characterized; some consider them complementary, others — in opposition. On the level of methods applied a significant tension between the IP law and the competition law reveals itself: whereas the patent law is the source of the monopoly for an entitled person as it guarantees them the right to the exclusive use of the invention, the competition law focuses on leveling the playing field on which the entrepreneurs are competing against each other. 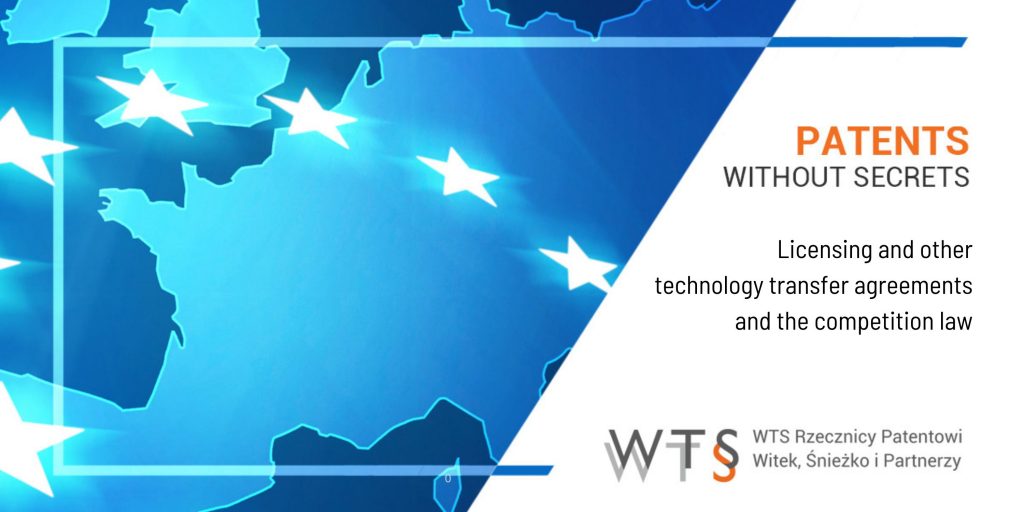 In this article we would like to take a look at Commission Regulation (EU) No 316/201 of 21 March 2014 on the application of Article 101(3) of the Treaty on the Functioning of the European Union to categories of technology transfer agreements. In particular, we will examine the solutions that the Regulation proposes, seeking for a compromise between the protection of exclusive patent rights and the freedom of competition in the context of licensing agreements and other technology transfer agreements.

The primary EU law protects these two values at stake. The guarantees of the protection of property, as indicated by Professor Du Vall, should be understood broadly, as extending to intellectual property. We shall, therefore, take note of Art. 345 of the Treaty on the Functioning of the European Union (TFEU) pursuant to which Member States retain full competence with respect to regulating the system of property ownership in their legal systems. Moreover, Art. 36 stipulates that restrictions on imports and exports are permissible if they are justified, i.a., on the grounds of the protection of industrial and commercial property.

When it comes to the protection of competition, we should pay attention especially to Art. 101 of the TFEU prohibiting all agreements between undertakings (as well as decisions by associations of undertakings and concerted practices) which may affect trade between Member States and which have as their object or effect the prevention, restriction or distortion of competition within the internal market. Subsequently, the provision provides a (non-exhaustive) catalogue of types of agreements, decisions, and practices that the prohibition shall apply to: e.g., those which limit or control production, markets, technical development, or investment (Para. 1). Such agreements (or decisions) shall automatically be void (Para. 2). The next section of the provision is the most relevant to us as it concerns the exemptions from the prohibition. Namely, the provisions of paragraph 1 may be declared inapplicable in the case of: any agreement or category of agreements (decisions/practices) between undertakings, which contributes to improving the production or distribution of goods or to promoting technical or economic progress, while allowing consumers a fair share of the resulting benefit. At the same time, such agreements cannot (a) impose on the undertakings concerned restrictions which are not indispensable to the attainment of these objectives; nor (b) afford such undertakings the possibility of eliminating competition in respect of a substantial part of the products in question.

The exemption of technology transfer agreements from the prohibition is an issue addressed by the Regulation that we would like to discuss here.

The aims of the Regulation

The aims of the Regulation have been expressly laid down in its Preamble. According to its third paragraph, the Regulation should meet two fundamental requirements: ensuring effective protection of competition and providing adequate legal security for undertakings. It is underscored that “the need to simplify administrative supervision and the legislative framework to as great an extent as possible” should be taken into account as well.

The Regulation specifies the conditions for exempting licensing agreements from the prohibition laid down in Art. 101(1) of the TFEU.

The material scope of the Regulation

A technology transfer agreement does not have to constitute an agreement sensu stricto, as this term can signify as well a decision of an association of undertakings or a concerted practice (Art. 1(1)(a)). Meanwhile, the term “technology rights” shall be understood to mean such rights (or their combination, including applications for or applications for registration of those rights) as patents, utility models, design rights, topographies of semiconductor products, SPCs for medicinal and other eligible products, plant breeder’s certificates, and software agreements. Finally, this category would comprehend know-how as well (Art. 1(1)(b)).

The condition for the application of the exemption: market-share threshold

Detailed definitions of the relevant markets and the competing undertakings are provided in the Regulation.

The relevant market, from the perspective of the competition law, is the market for products that consumers consider as substitutes (due to their properties, prices, and intended use). The EU law distinguishes between relevant product market — the market for the contract products and their substitutes (Art. 1(1)(j)) and relevant technology market — the market for the licensed technology rights and their substitutes (Art. 1(1)(k)). The geographic aspect is also important — we will be dealing with the relevant market only where the relevant product or technology market can be assigned to a particular territory: the area in which the conditions of competition are sufficiently homogeneous and which can be distinguished from neigh­bouring areas because the conditions of competition are appreciably different in those areas (Art. 1(1)(l) in connection with (m)).

The most important restrictions to the application of the exemption

In the provisions of the Regulation we can find a list of certain prohibited clauses, different for horizontal and vertical licensing.

Regarding vertical licensing agreements concluded between undertakings that are not competitors, the exemption shall not apply if they have for an object: the restriction of a party’s ability to determine its prices when selling products to third parties; or the restriction of the territory into which, or of the customers to whom, the licensee may passively sell the contract products.

Article 5 of the Regulation lists certain clauses that, as Professor Du Vall indicates, “are neither categorically prohibited, nor can be exempted automatically,” but rather require “an individual evaluation of their positive and negative effects on competition”. If it is determined that such a clause violates Art. 101 TFEU, other provisions of the agreement could still benefit from the exemption.

What types of clauses would fall into this category?

Additionally, with respect to undertakings that are not competitors, a similar legal regime shall apply to clauses concerning obligations limiting the licensee’s ability to exploit its own technology rights or limiting the right of any of the parties to carry out research and development (unless such latter restriction is indispensable to prevent the disclosure of the licensed know-how to third parties).

The supervision of the European Commission

The European Commission, guarding the fair competition within the EU’s internal market, has been equipped with significant powers that should be noted in this context.

First, the Commission may withdraw the benefit of the exemption where it finds in any particular case that a technology transfer agreement produces effects that are incompatible with Article 101(3) of the TFEU. In particular, it can apply this measure where the access of third parties’ technologies or of potential licensees to the market is restricted (Art. 6).

Second, the Commission is empowered to declare that the Regulation does not apply where parallel networks of similar technology transfer agreements cover more than 50 % of a relevant market. Such a decision can only be made through a Commission’s regulation which becomes applicable no earlier than 6 months following its adoption (Art. 7).