Patent pools, in brief, constitute an agreement between two or more patent holders who share their patents between themselves or with third parties. In this article we would like to introduce you to this issue, paying attention in particular to purposes for which patent pools are set up and to challenges related to their assessment from the point of view of anti-competition law. 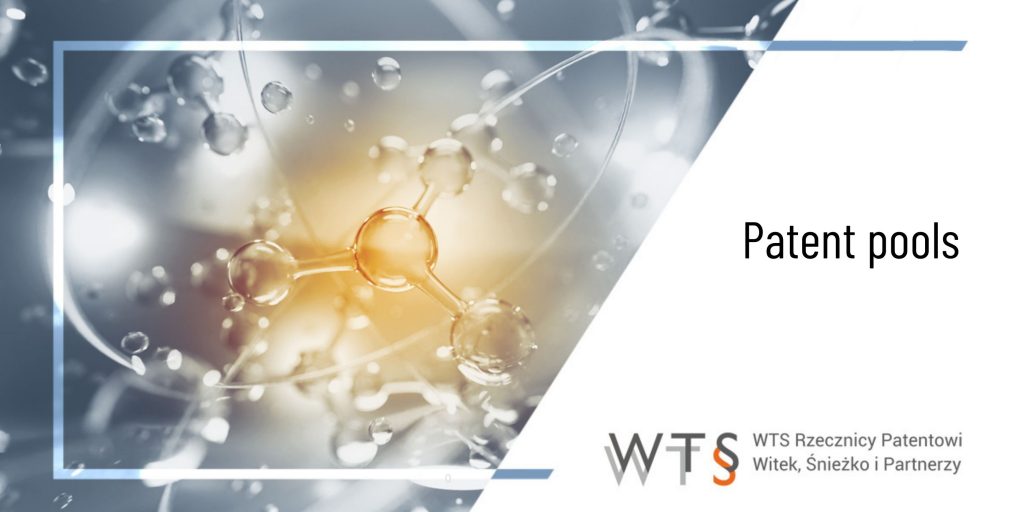 Where we can encounter patent pools

One of the first known patent pools, Sewing Machine Combination, was formed in 1856 — the manufacturers of sewing machines: Grover, Baker, Singer, and Wheeler & Wilson entered into an agreement to share their patents for essential components of sewing machines and pool them together. That allowed them for avoiding costs related to licensing and litigation.

Another historical example involves the early stages of the aviation industry: when the USA decided to enter World War I, the need arose to launch manufacturing of airplanes on a bigger scale. Those efforts were being, however, blocked by two main patent holders, i.e., Wright Company and Curtis Company. The U.S. Administration pressured them into agreeing to form a patent pool — the Manufacturer’s Aircraft Association.

Currently, the establishment of patent pools is a common practice especially in the context of advanced technologies. In their case, it is usually necessary to comply with certain standards to ensure interoperability of specific solutions/devices (a consumer who purchases a given product from a manufacturer X, should be able to choose to acquire compatible products from a manufacturer Y). The classical examples in that regard are MPEG-2, DVD, Wi-Fi, or Blue-Ray.

As for the pharmaceutical field, it is worth mentioning the activity of Medicines Patent Pool — it is not a patent pool as such, but an organization backed by the UN. It was founded in 2010 and is based in Geneva. Its tasks include increasing the affordability of medicines used in the treatment of HIV, tuberculosis, and hepatitis C — through conducting negotiations with patent holders and reaching agreements with them that lead to forming patent pools. In 2020, the organization expanded its area of operations and focused also on technologies related to combatting the SARS-CoV-2 virus, joining the WHO C-TAP (short for COVID-19 Technology Access Pool) as one of the partners.

How do patent pools operate

In general, all patents that are aggregated in a pool are made available to all the parties of the agreement. Usually, third parties are admitted to join the pool as licensees, and the agreement between patent holders includes provisions regarding the allocation of the licensing fees that are collected.

The transfer of rights can occur directly between patent holders and licensees or indirectly through dedicated entities, such as different sorts of joint venture companies set up to manage patent pools.

One of the main purposes of forming patent pools is supporting the innovative activity — they contribute to achieving results faster, more efficiently, and offer greater possibilities regarding the commercialization of inventions.

What is more, patent pools involve significant savings, as they permit to reduce transaction costs, both those incurred by licensors and licensees. Also the costs of litigation concerning potential patent infringements are reduced or eliminated altogether. In the above-mentioned WIPO report, it is underscored that it is especially important for small and medium enterprises for whom litigation costs might not be affordable.

Speaking about patent pools, it is worth mentioning the distinction that is strongly emphasized in the WIPO report dedicated to that subject: we can divide patents into substitute and complementary. In case of substitute patents, they have been granted for alternative technologies that can be used in parallel without infringing the patents. They will be, therefore, in the relationship of competition (which will translate into increased chances of qualifying the pooling arrangements as disrupting the market competition).

Complementary patents, on the other hand, are patents that have to be used together to produce a specific technological output. They can be compared to matching pieces of a puzzle. If we hold just one patent, we are incapable of starting the manufacturing process. From a legal point of view, complementary patents are two mutually blocking patents — patent A would infringe patent B and vice versa, although, as we can read in the WIPO report, it is possible for patents to be one-way blocking while remaining complementary.

Patent pools, as it was already indicated, will be particularly common in those areas where standardization is required. As the WIPO report indicates, “a technical standard is an established norm or requirement about a technical system that establishes uniform engineering or technical criteria, methods, process and practices”. In many instances, patent pools would be helpful in the implementation of such standards — however, not any patent pools but only those that contain essential patents defined by WIPO as “those required in order to comply with a technical standard” (essential patents are complementary by nature). Meanwhile, we will be dealing with non-essential patents if there exist substitutes to the covered technology.

The impact of patent pools on the competition in the market eludes any straightforward assessment. In the Guidelines published by the U.S. Department of Justice and the Federal Trade Commission (Antitrust Guidelines for the Licensing of Intellectual Property), as well as in the WIPO Reports, it is stated that pooling arrangements can provide certain procompetitive benefits. Those benefits are closely linked to the goals that such arrangements are supposed to serve and concern an increase in efficiency through integrating complementary technologies, clearing blocking positions, reducing transaction costs, and eliminating litigation costs.

Patent pools, however, can also produce diametrically different effects and lead to disruptions in competition. The WIPO report presents three different scenarios in which pooling arrangements might constitute anticompetitive practices:

Likewise, in the US Guidelines it is indicated that patent pools can be disadvantageous if they are used to accomplish price-fixing and market division. This is the reason why, for instance, in a key case of Federal Trade Commission v. Summit Technology and VISX, Inc., the Commission declared illegality of the patent pool examined by it, concluding that its main purpose was to grant the parties the power to control prices. The pool had been set up by entrepreneurs who were the only ones to possess a laser technology used in eye surgery (photorefractive keratectomy). In their relationship with licensees, they required a payment of $250 licensing fee each time the laser was used to perform the surgery to a joint venture company they had established.

Considering the prevention of disruptions in competition, the manner in which a particular agreement setting up a patent pool is drafted plays a crucial role. It is essential that all licenses are granted to potential licensees on fair, reasonable, and non-discriminatory terms (FRAND). They should not in any way restrain the licensees in their efforts to develop alternative technologies — such an effect would be undesirable as it would mean effectively the limitation imposed on the innovative activity.

Patent pools in the EU law

The provisions of the Commission Regulation (EU) No 316/2014 on the application of Article 101(3) of the Treaty on the Functioning of the European Union to categories of technology transfer agreements do not mention the practice of forming patent pools. In principle, they will not be eligible for a block exemption — as it is remarked in “Patent Law” by Professor Du Vall, the manufacturing of licensed products does not constitute an object of such agreements. Moreover, granting licenses to parties from outside of the group would constitute a multiparty agreement which would also place it beyond the scope of block exemptions.

The Commission dealt with the issue of patent pools in greater detail in its Communication — Guidelines on the application of Article 101 of the Treaty on the Functioning of the European Union to technology transfer agreements (2014/C 89/03). The Guidelines mention technology pools whose definition very closely resembles that of patent pools: they constitute “arrangements whereby two or more parties assemble a package of technology which is licensed not only to contributors to the pool but also to third parties”. Likewise, a distinction between substitute and complementary technologies is drawn, as well as a distinction between essential and non-essential technologies — such a classification would be decisive for the assessment of legality of patent pools (however, it is mentioned that in certain cases a clear-cut classification of a given patent might not be possible).

The Guidelines specify that if we are dealing with patent pools consisting only of essential technologies (patents), in principle, there will not be a violation of the prohibition under Article 101(1) of the Treaty on the Functioning of the EU (the prohibition of all agreements between undertakings, decisions by associations of undertakings and concerted practices which may affect trade between Member States and which have as their object or effect the prevention, restriction or distortion of competition within the internal market). Here, it is critical to ensure that certain additional requirements are satisfied: e.g., licensing agreements have to comply with the FRAND standard, parties contributing technology to the pool and the licensees have to be free to challenge the validity and the essentiality of the pooled technologies; furthermore, sufficient safeguards have to be adopted to guarantee that exchange of sensitive information is restricted to what is necessary for the creation and operation of the pool. In case of non-essential patents, the infringement of prohibition under Article 101(1) might, however, occur (“Where a pool encompasses non-essential technologies, the agreement is likely to be caught by Article 101(1) where the pool has a significant position on any relevant market”).