The extent of the protection conferred by a patent is determined by claims included in the patent description. This rule finds expression in Article 63 Section 2 of the Polish Act of 30 June 2000 — the Industrial Property Law (IPL); the provision in question specifies that the description and drawings can be used for the interpretation of claims. Despite seemingly unambiguous wording, this rule is causing quite serious controversies: in which manner shall claims be interpreted? What exact role shall the description and drawings play? In this article we will attempt to answer those questions, presenting you with available methods of the interpretation of patent claims, taking into account the differences that occur between the Polish legal system and the system of the European Patent Organization (EPO).

Solving those dilemmas is of a considerable importance as those are the patent claims that determine the scope of exclusivity: they indicate where lies the border between the state of the art and the sphere of exclusive rights of a patent holder. As we can read in the commentary to the IPL edited by professor Sieńczyło-Chlabicz, “determining the objective scope of a patent is one of the most critical issues in patent law, as it serves to distinguish between technical solutions belonging to the domain of industrial freedom and the patent monopoly of a patentee”. 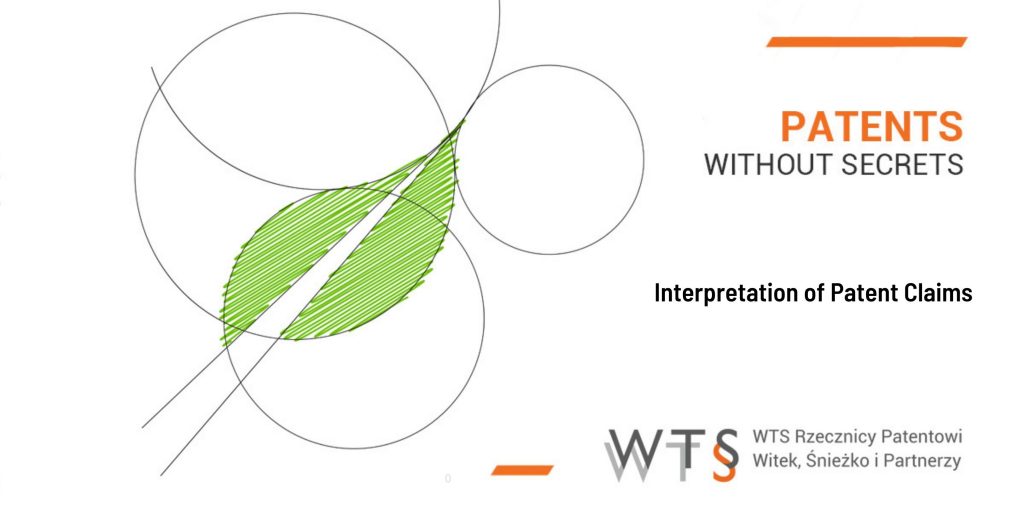 The format of patent claims

The independent patent claims can consist of two portion: a non-characterizing part and a characterizing part. The first one, as it is indicated in the Regulation of Prime Minister of 17 September 2001 on filing and reviewing applications for inventions and industrial designs, shall begin by defining the object of the invention claimed and list technical features necessary to determine the object of the invention, altogether considered to constitute the state of the art (§ 8 Section 1(1)). Meanwhile, the characterizing portion of the claim would be preceded by an expression “characterized in that/by;” it lists those technical features (characterizing features) of the claimed invention that are supposed to distinguish it from other technical solutions displaying features indicated in the non-characterizing portion; in the case of chemical compounds, it shall demonstrate the structure of the compound, as well as list its substituents (§ 8 Section 1(2)).

Even though in the doctrine we can come across an opinion that in determining the scope of a patent, we shall take into account solely a characterizing portion, such a view is not commonly shared. It was expressly opposed, for instance, by the Polish Supreme Court in its judgment of 28 January 2004 in the case IV CK 411/02 (“One cannot share the view of the Appellate Court that in order to determine the objective scope of the protective right only so-called characterizing portion included in a description of an industrial design is relevant”). In the textbook by professor Du Vall likewise it is pointed out that there are not any grounds neither in Polish law, nor in European to differentiate elements of claims as important and non-important. The scope of a patent shall be determined on the basis of non-characterizing and characterizing portions, considered together, integrally, without carrying out any selection of particular features. This position is also supported by the amendment of the PM’s Regulation in question adopted on 2 March 2015, pursuant to which the previous wording of the provision concerning portions of claims was revised in such a way that the term “shall” was replaced by “might,” and therefore optionality of this solution was introduced and any efforts to distinguish characterizing portions in order to assess the scope of a patent become moot.

The types of interpretation

Traditionally, we recognize three types of interpretation: literal, extensive, and restrictive, however, in our reflection on how to construe patent claims, we shall be interested only in the competition of the first two kinds.

In the literal interpretation, we focus on the plain meaning of claims. We do not examine whether the description suggests a broader scope of protection than implied by the claims. We refer to the descriptions and drawings only if the content of claims requires clarification or specification.

In case of this type of interpretation, we go beyond the plain, literal meaning of claims. We take into consideration the description and drawings even if claims are utterly unambiguous. As a result, we end up determining a broader scope of protection than if we applied literal interpretation. Hence, as it is remarked in professor Du Vall’s “Patent Law,” the patent protection would encompass instances of not using all the claimed features:

“1) if a new feature has been introduced in place of a claimed feature which is equivalent to it;

2) if a claimed feature has been entirely left out”.

Thus, we need to conclude that the question of the extensive interpretation is closely linked to the theory of equivalents which will be discussed by us in detail in our next article.

The method of interpretation in the Polish legal system

Polish scholarship and judicial rulings favour the concept of literal interpretation. Such an approach seems justified if we take into account that provisions of the ILP do not leave much room for manoeuvre in that regard. As we can read in the commentary by professor Sieńczyło-Chlabicz, “with the current wording of Article 63 Section 2 of the ILP there are no grounds for determining a broader scope of a patent than resulting from literal meaning of patent claims”.

The description and drawings so useful only to an extent that they constitute a clarification of claims. As far as they introduce elements not covered by patent claims, they remain irrelevant: they cannot shape the scope of the protection, they cannot provide an independent basis for determining features of an invention.

This view was cofirmed by the Provincial Administrative Court in Warsaw in a judgment of 8 March 2017 (VI SA/Wa 1554/16); the Court held that “the strict interpretation of patent claims requires to take into consideration only what has been expressis verbis formulated in them,” at the same time it found extensive interpretation impermissible, invoking the constitutionally protected freedom of business activity, as well as limitations imposed on common and free use of a protected technical solutionresulting from a patent.

The caselaw is consistent with regard to a function that the description can serve in the process of interpretation: which is, above all, the clarification of claims. The Supreme Court in a judgment of 10 December 2015 (V CSK 149/15) stressed that, in the light of a general rule that “the scope of exclusively granted by a patent shall correspond with the scope of contribution of that invention to development of the state of the art, which is achieved through including in the patent description detailed information regarding given invention,” referring to the description to construe claims might, indeed, be necessary. Nonetheless, in the same ruling we read subsequently that “the description can serve to elucidate terms included in claims, because it indicates the manner of understanding the protected solution”.

The method of construing claims in European patents

Under Article 69 of the Convention on the Grant of European Patents concluded in Munich in 1973, the extent of the protection conferred by a European patent or a European patent application shall be determined by the claims; nevertheless, the description and drawings shall be used to interpret the claims. In an attempt to ensure greater uniformity in understanding of that provision, the member states of the EP adopted, through the Act revising the Convention of 29 November 2000, the Protocol on the Interpretation of Article 69 EPC —which, pursuant to Article 164 of the EPC, is an integral part of the Convention, so has the same legal force as the entirety of its provisions.

The Protocol seeks to strike a balance between two extreme positions: on the one hand, the rigorous literal interpretation, and on the other, the extensive interpretation, removed from the plain meaning of claims, in order to reconcile fair protection of a patent holder with legal certainty for third parties.

Article 1 of the Protocol provides that Article 69 should not be interpreted as meaning that the extent of the protection conferred by a European patent is to be understood as that defined by the strict, literal meaning of the wording used in the claims, the description and drawings being employed only for the purpose of resolving an ambiguity found in the claims. It is at the same time stipulated that it is not permissible to assume that claims serve only as a guidelines and that the actual protection conferred may extend to what, from a consideration of the description and drawings by a person skilled in the art, the patent proprietor has contemplated. Article 2 refers to the protection of equivalents, which, within the EPC system, is guaranteed to a patent holder — this issue, however, would be addressed in a separate article.

The methods of interpretation that are applied within the EPC system are different from those which are prescribed in Polish law. As the Provincial Administrative Court in Warsaw in a judgment of 29 June 2010 (VI SA/Wa 188/10) found, there are no reasons to apply by analogy rules that pertain to the interpretation of European patents in the Polish system. This issue is quite controversial among numerous experts: the opponents of transposing the EPC rules to Polish law invoke the autonomy of two systems, while the advocates of such an approach refer to the identical wording of relevant provisions and raise calls to make practice more uniform. We can notice certain signs of changes to come in that area, and the dominance of the opinion that the exclusivity flowing from patents issued by the Polish Patent Office cannot be construed extensively is increasingly often put into question: for instance, in a commentary to the IPL edited by professor Skubisz, there is a mention of “a trend, also in judicial rulings, to move away from such a rigorous position that is becoming more evident”.