In our previous article in the cycle “Patents Without Secrets” we discussed the available methods applied in interpretation of patent claims, pointing out to some characteristic discrepancies occurring between the manner of construing claims in the Polish legal system (the Act of 30 June 2020 – the Industrial Property Law (IPL)) and on the grounds of the Convention on the Grant of European Patents concluded in Munich in 1973 (EPC). Knowing that while the Polish legislator currently still prefers, in principle, the literal interpretation, the relevant practice differs in particular jurisdictions, this time we would like to focus on the extensive interpretation and the key role played in it by the doctrine of equivalents. 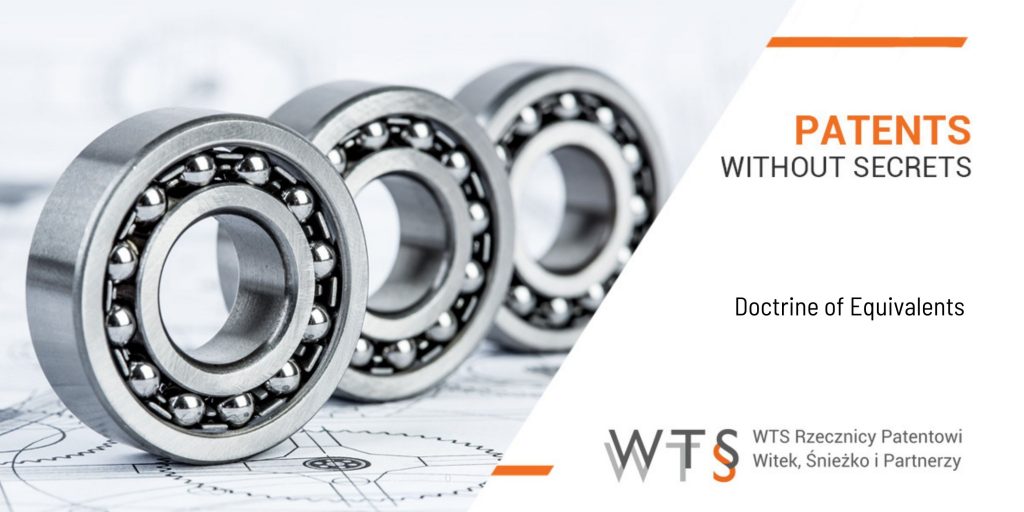 What are the equivalents

According to the definition presented in “Patent Law” by professor Du Vall, “two technical means are equivalent to each other if they serve to achieve the same ultimate purpose which is solving the same technical problem, perform the same or in general an analogous function (in the context of the solution as a whole), and lead to producing the same or an analogous technical effect”. The result of the application of the doctrine of equivalents in the process of interpretation will be, therefore, extending the scope of a patent to equivalent solutions.

It is also worth recalling a definition formulated by the Appellate Court in Łódź in the judgment of 9 November 2012 (I ACa 612/12): the Court held that we would be dealing with equivalents, if “a technical means indicated in patent claims was replaced by another, producing, however, the same (intended) effect as the solution claimed, while for an average person skilled in the art the application of the other (equivalent) means does not require an inventive output, as it is essentially the embodiment of the idea included in the patent claims”.

From the point of view of a patent holder the doctrine of equivalents offers certain advantages as well as challenges. Surely, what makes it relatively appealing is the fact that it facilitates the proof of fulfilling requirements of novelty and inventive step. At the same time, if patentees are raising claims that their patents have been infringed, demonstrating that the infringement has in fact occurred, becomes significantly more difficult.

The protection of equivalents on the grounds of the EPC

The Protocol on the Interpretation of Article 69 EPC, which is an integral part of the Convention, requires to take equivalents into consideration in the process of interpretation of patent claims. Pursuant to Article 2 of the Protocol, due account shall be taken of any element which is equivalent to an element specified in the claims. Such a solution was supposed to contribute to making practice in the EPO member states more uniform, nonetheless, without a clear definition of what should be understood by the term of equivalents, certain discrepancies still occur and there is not any agreement regarding what determines that a particular solution can be considered an equivalent.

Controversies surrounding the proper manner of identifying equivalents are well illustrated by the famous case of Epilady. The Epilady, a depilatory device, produced by Improver, was protected since 1982 by the European patent EP 0101656; in 1990, a European patent was granted to a company Remington for a competing device serving for hair removal. In case of the first of the devices, the patent claims mentioned a metal helical spring which was rotated arounds its axis, powered by an electric motor; the Remington’s patent, meanwhile, indicated a cylindrical rod of elastic rubber, powered by an electric motor as well. Improver sued Remington for a patent infringement in several European states, i.a., in German and British jurisdictions. The courts in these countries came to strikingly different conclusions: while in Germany the cylindrical rod was recognized as an equivalent of the spring and a court held that the infringement took place, in the United Kingdom a court found that Improver’s patent covered specifically the spring — and since Remington did not apply such a solution in its device, the infringement did not occur.

An accurate diagnosis is offered by professor Du Vall as a conclusion of his analysis of the Epilady dispute: “Traditional state practice of adjudicating patent infringement disputes plays a larger role than formal regulation of the extent of protection”.

Let us take a look, therefore, at the relevant practice in Germany and the UK, and try to find out what are the decisive factors in recognizing particular solutions as equivalents in their respective legal systems.

In Germany, the extension of patent protection to equivalents depends on carrying out a three-step test (Schneidemesser I). It requires answering three following questions:

In order for a German court to accept a plaintiff’s objection than an infringement of their patent has occurred, the objection raised must pass a test formulated in another significant judgment of the German Federal Court of Justice: in the Formstein case it held that it is necessary to demonstrate that a variant does not belong to the state of the art, nor is it obvious to the skilled person.

B) The United Kingdom

In the British jurisdiction, rather than applying the doctrine of equivalents understood in a strict manner, courts used to be guided by the pith and marrow doctrine — which involves taking into consideration the essential features of a claimed invention and identifying so-called “mechanical equivalents:” equivalent solutions that can be deduced directly from the literal wording of patent claims. In the eighties an evolution towards functional interpretation of claims ensued. In the Catnic case of 1981, a three-step test was proposed that British courts have since relied on when reviewing patent infringement cases. It required responding to three questions:

If the answer to the final question is negative, we can assume that the variant is covered by the claim and the infringement took place. After Catnic, the functional approach became more firmly established in the caselaw of British courts, while the subsequent Kirin-Amgen test introduced certain modifications:

The functional interpretation in the British legal system has been, however, abandoned in the judgment of the Supreme Court in the case Actavis v. Eli Lilly of 2017, wherein Lord Neuberger proposed new criteria, breaking with the previous practice. From now  on an infringement would occur if an answer to one of these two questions was positive:

Revisions in the newest version of the EPO Guidelines

The new version of the EPO Guidelines which was published in March 2021 can have an impact on the methods applied in the identification of equivalents of solutions claimed in patents (see: The New EPO Guidelines: An Overview of the Key Changes WTS Legal Report No. 5/2021). Pursuant to the guideline F-IV, 4.3, any inconsistencies between the description and the claims must be avoided if it may throw doubt on the extent of protection and therefore render the claim unclear or unsupported (under Article 84, second sentence) or, alternatively, render the claim objectionable (under Article 84, first sentence). If a given portion of the description and/or drawings does not reflect the claims, we need to implement certain changes: either we delete those embodiments which are no longer covered by the independent claims, or we keep them, stating prominently that the particular embodiment is not covered by the claims. This other option is, however, only available if that embodiment can reasonably be considered to be useful for highlighting specific aspects of the amended claims.

It is being pointed out that the new Guidelines can potentially affect the assessment of equivalents by the European Patent Office — the future practice would verify to what extent. Undoubtedly, applicants will have to adjust descriptions in accordance with the new requirements. And since certain embodiments in the description would have to be explicitly marked as not covered by patent claims, it would be more difficult to demonstrate that they infringe on a patent.

The reversed doctrine of equivalents

It is also worth mentioning that in the literature we might come across the concept of the reversed doctrine of equivalents. The reversed doctrine of equivalents, as it is explained in the commentary to the IPL edited by professor Skubisz, posits that “despite identity of patent claims of two solutions there will not be an infringement of a patent if the contested solution achieves its function in a different way than the invention protected by the patent”. A reference here is made to the functionality of invention, meaning that we are breaking with the literal wording of the claims. It is a doctrine typical for the American caselaw and it has not gained popularity within the EPC system.